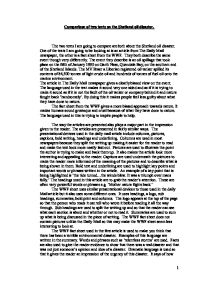 Comparison of two texts on the Shetland oil disaster.

Comparison of two texts on the Shetland oil disaster. The two texts I am going to compare are both about the Shetland oil disaster. One of the texts I am going to be looking at is an article from The Daily Mail newspaper, the other is a fact sheet from the WWF. They both describe the same event though very differently. The event they describe is an oil spillage that took place on the fifth of January 1993 on Garth Ness, Quendale Bay, on the southern end of the Shetland Islands. The MV Braer a Liberian registered oil tanker spilled its contents of 84,500 tonnes of light crude oil and hundreds of tonnes of fuel oil onto the marine environment. The article in The Daily Mail newspaper gives a clearly biased view on the event. The language used in the text makes it sound very one sided and as if it is trying to make it sound as if it is not the fault of the oil tanker or company behind it and nature fought back 'handsomely'. By doing this it makes people feel less guilty about what they have done to nature. ...read more.

Words and phrases like these are used to divert attention away from the fact that there has been a terrible disaster where 84,500 tonnes of oil has been spilled onto the marine environment. The article describes how nature is 'getting back to normal', how young are being born healthy and it makes it sound very positive and hopeful. The writer is trying to portray how nature has battled against 'mans mistake' and overcome the odds. It even goes on to suggest that nature is perhaps even better after the disaster. The writer comments ' we wondered what all the fuss had been about.' The writer of this article asks the reader questions in paragraph three. This method of writing is used to make the reader feel involved emotionally and it also helps to add drama to the article. One question the writer asks the reader is 'what of the predictions of doom and disaster merchants whose voices where raised by so many?' When the initial facts are noted in the article the writer still attempts to cover them up. The writer talks of 'Blackened beaches', 'Washed up dead birds', and 'Sheep and humans half blinded by the oil filled breezes.' ...read more.

Like the WWF fact sheet, this article also uses emotive language to persuade the reader, however the emotive language is used for the opposite reason. Instead of using it to show just how bad the disaster was, the writer uses it to say how the disaster wasn't that bad. Examples of the emotive language used are words such as, 'triumph', 'signs of hope' and 'rebirth of beauty'. These words didn't convince me though because the writer has an obviously biased view and to me it sounds as if this article is attempting to cover up the incident and make it sound as if it wasn't the fault of the oil tanker and the company behind it. I thought that the most effective and convincing article was the WWF fact sheet. The language in the text convinced me because the article was written very clearly with statistics and quotes to back up their points. Compared to the other article I thought this was better because instead of trying to cover up what happened the WWF article just gave the bare facts. The powerful emotive language also helped to convince me with words such as 'rapidly,' 'critical' and 'disaster'. 1 ...read more.