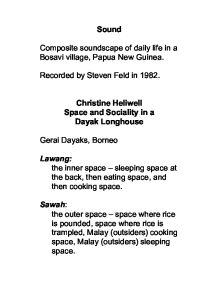 Sound Composite soundscape of daily life in a Bosavi village, Papua New Guinea. Recorded by Steven Feld in 1982. Christine Heliwell Space and Sociality in a Dayak Longhouse Gerai Dayaks, Borneo Lawang: the inner space - sleeping space at the back, then eating space, and then cooking space. Sawah: the outer space - space where rice is pounded, space where rice is trampled, Malay (outsiders) cooking space, Malay (outsiders) sleeping space. "During my first two months in Gerai, while living with a household in its longhouse apartment, I was unable to understand why my hostess was constantly engaged in talk with no one. She would give long descriptions of things that had happened to her during the day, of work that she had to do, of the state of her feelings and so on, all the while standing or sitting alone in her apartment. ...read more.

Is the room silent? Is silence the absence of sound? Any sound can be communicative Sounds create social worlds and produce sociality. The Power of Silence by Adam Jaworski Example 1 Shortly after the wedding of her daughter, our next-door neighbour visited my wife and me. In order to hear what the purpose of her visit was my wife and I invited her to sit down in the living room and we started chatting. At one point the neighbour turned to me and asked how much she owed me for a small favour I had done for her in connection with the wedding. I was genuinely appalled at the question so I did not say anything and just looked peeved at the woman. ...read more.

Apache meet strangers in silence. The people of Amigo, West Virginia talk their world into being with ceaseless narratives, commentaries. English Quakers - established in 17th century. God will speak to people who are prepared to sit in silence. Performing sound "Music is culturally organised and culturally meaningful sound" (John Chernoff). * contexts of performance * aesthetics * technical aspects * history of music * transmission * music and cultural identity Owning sound The story of Voice of the Rainforest - told by Steven Feld in the article "From Schizophonia to Schismogenesis: The Discourse and Practices of World Music and World Beat". Collaboration with Mickey Hart (drummer of the Grateful Dead), and the Kaluli people of the Bosavi. Dulugu ganalan "lift-up-over sounding" -overlapping, interlocking, alternating sounds. World Music - whose world? whose music? Exotic Musics, e.g. Baka Beyond Exotic Mixes, e.g. Pygmy Pop Napster - music from the internet - anti music industry. ...read more.