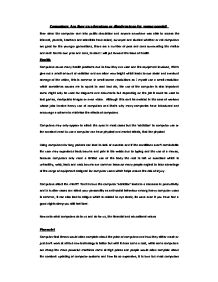 Computers: Are they an advantage or disadvantage for young people?

Computers: Are they an advantage or disadvantage for young people? Ever since the computer cam into public circulation and anyone anywhere was able to access the internet, parents, teachers and scientists have asked, surveyed and studied whether or not computers are good for the younger generations, there are a number of pros and cons surrounding the matter and each has its own pros and cons, to start I will put forward the issue of health. Health Computers cause many health problems due to how they are used and the equipment involved, VDU's give out a small amount of radiation and are often very bright which leads to eye strain and eventual damage of the retina, this is common in small screen resolutions as I myself use a small resolution which sometimes causes me to squint to read text etc, the use of the computer is also important some might only be used for diagrams and documents but depending on the job it could be used to test games, manipulate images or even video. Although this cant be avoided in the case of workers whose jobs involve heavy use of computers and that's why many companies have introduced and encourage a scheme to minimise the effects of computers. ...read more.

the hardware or by vesting the companies website and downloading them from there but of course there are those who don't have access to the internet because it either isn't available to them or they simply cant afford nor need it which brings drawbacks to their computer use, the internet has become an important part in computers and almost every owner has a connection, the internet provides access to millions of companies and download sites which are sometime crucial if you have hardware that needs updated and you cant find the drivers elsewhere. Computer repair is also cause for argument, the chances of a computer being incapacitated by viruses, transport damage and even dust is more common that's why computers are so fragile, and also why the cost for repair is often high. Investing in a computer has its pros and cons like everything else but in the long term the purchase of a computer can become helpful for work, business and education and even just for fun. Education Now more than ever the use of a computer is needed for school, be it assignments, homework, revision or reference, a lot of school subjects require the use of a computer be it ICT ...read more.

don't cost much which makes them easy to get, and the majority of computer user between the age of 12-17 would mainly use their home computer for gaming purposes, and not only are games bought but the internet also plays a part, it is possible to download games and play them or play them direct from the website which encourages internet use, a lot of games can be time consuming such as real time strategy and platform, RPGs which have 'levels' or stages which need to completed to advance which can become addictive as the game constantly challenges the player testing there ability. The Verdict In my view the pros out weigh the cons, computers benefit us in so many ways but have their cost, but then doesn't every good thing have a cost?, computers have revolutionised our lives, they have given us access to information no matter where we are, the ability to produce stunning presentations in a few minutes and the access to information that benefits business and education, if it weren't for the computer we would still be using typewriters, people have there own views on computers everyone has their own opinion and they have a right to share it. ...read more.