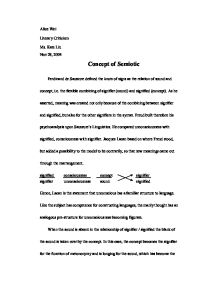 Alice Wei Literary Criticism Ms. Kate Liu Nov 28, 2004 Concept of Semiotic Ferdinand de Saussure defined the knots of signs as the relation of sound and concept, i.e. the flexible combining of signifier (sound) and signified (concept). As he asserted, meaning was created not only because of the combining between signifier and signified, but also for the other signifiers in the syntax. Freud built therefore his psychoanalysis upon Saussure's Linguistics. He compared unconsciousness with signified, consciousness with signifier. Jacques Lacan based on where Freud stood, but added a possibility to the model to be contrarily, so that new meanings came out through the rearrangement. signified consciousness concept signifier signifier unconsciousness sound signified Hence, Lacan is the statement that unconscious has a familiar structure to language. ...read more.

This is the main theme of the German film "The Otherside of Silence" (Jenseits der Stille) (1996)1. signified concept sound signifier (absence of sound) concept concept The German word "still" has double meaning of silence and secret (uncanny). These two meanings occur in the film times alternately, times together. The protagonist Martin was persistent in his quiet world, which consisted of his uncanny inside; but he encountered ceaseless with the "concept" of sound - which was opposite to his identity / subject and he could never understand. His traumatic experience was a concert on his father's 50th Birthday, on which his younger sister had well performed on Clarinette and his father was very proud of her. ...read more.

For Lacan, metononymy was the signifier of desire. The things which were longing for were always substituted and postponed. In the film, the sound / voice / music which Martin had anxiety for was substituted by gestures, by words, by gazing, by touching, by vibration and were always postponed. Only when "traumatic memory" was recalled, sound / voice / music appeared with the fragments of memory. The sound which was always longing but could not be gained showed the meaning equal to the unconsciousness during the process of exchange between "signifier - signified". This sound became alternative "the discourse of the Other" - which could not be identified by himself. Only when he stand outside from himself (on the other polemic), the silence (and what in it repressed) articulated. 1 Link, Caroline (Regiseur): Jenseits der Stille. 1996. ...read more.