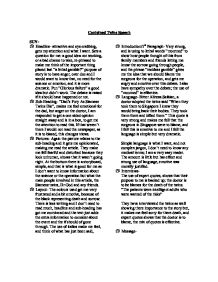 Conjoined Twins Speech SUN- * * Headline- attractive and eye crabbing, gets my attention and what I want. Sets a question for me: a good idea not working, or a bad chance to take, re-phrased to make me think of the important thing placed last "a lethal gamble?" purpose of story is to have anger, over doc and I would want to know that, no need for the science or emotion, and it is more dramatic. Pun "Glorious failure" a good idea but didn't work. The debate is raised if it should have happened or not. * Sub-Heading- "Dad's Fury As Siamese Twins Die", makes me feel emotional for the dad, but anger on the doctor, I am responded to get a one sided opinion straight away and is in a box, to get me the attention to read this. If that weren't there I would not read the newspaper, as it is to biased, this changes views. * Pictures- Again the picture relates to the sub-heading and it gets me opinionated, making me read the article. ...read more.

Simple language is what I want, and not complex jargon, I don't need to know any medical terms; I am a very easy reader. The amount is little but has effect and strong use of language, emotive was morally justified. * Interviews- The use of expert quotes, shows that their purpose to me is backed up; the doctor is to be blames for the death of the twins. "The patients were intelligent adults who were warned of the risks" They have interviewed the twins as well showing there importance to the story but, it makes me feel sorry for there death, and expert quotes shows that the doctor is to blame, the mix of quotes is effective. * Message- INDEPENDENT * * Headline- >It is interested in telling me about the story: How did it happen. The debate raises my attention. >There isn't much emotive language or sensational language in the headline, because I want to know about the miraculous science more than emotion or blaming over Dr Goh. ...read more.

>The story is split into three things, emotion fact and debate, these are split in the story, but they don't use words to empathise on one of these criteria. People like me would not want to take sides but to read important things. * Interviews- There are a lot of interviews from medical experts "The risks were very high in this case," because again it is about the ethical question and there are some emotional quotes to. It is a mix of emotion, facts and debate. Emotion is that they wanted it so badly "If god wants us to live the rest of our lives as two separate, independent individuals, we will." But there are a lot on debate "the risks were very high in this case," and a bit of facts, German specialists told them surgery was too dangerous because they shared a vein that drained blood from their brains. * Message- The end message "We have waited [so long] because we didn't want to choose such a difficult option." This is left on a cliff hanger and lets me think of m own decision, the article doesn't want to get a opinion put to me, I wouldn't ant that, a broadsheet doesn't take sides. * Layout ...read more.