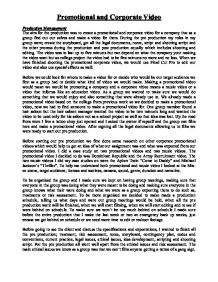 Production Management The aim for the production was to create a promotional and corporate video for a company that as a group find out our selves and make a video for them. During the pre production my roles in my group were; create the storyboard, get all the legal documents, recce, script and shooting script and the other process during the production and post production equally which includes shooting and editing. The video was to last up to five minuets but can depend on what the company your making the video want but as college project the video had to be five minuets no more and no less. When we have finished shooting the promotional corporate video, we would use Final Cut Pro to edit our video and also use special effects as well. Before we could look for whom to make a video for or decide who would be our target audience we first as a group had to decide what kind of video we would make. Making a promotional video would mean we would be promoting a company and a corporate video means a music video or a video that informs like an education video. As a group we wanted to make sure we would do something that we would enjoy and also something that were already use to. ...read more.

My idea was to show Bruno tattooing people showing off his skills and showing the reactions of the people who got the tattoo. The main selling point was showing off Bruno's skills, the price of a tattoo, location, piercing and how you can bring your own design to the store. Bruno liked the idea and agreed to let me be in charge of what I think would be the best for the promotional video but he wanted to the video to be ten minuets long, this was an issue because the assignment brief said the promotional video can only be five minuets long. After discussing to Bruno it can only be a certain amount of time he agreed it to be five minuets long. Bruno wanted me to know that he wanted me to film the best tattoos he will be doing and at the end of the filming production he wanted the right to see what we filmed and he would have the final word to put use certain footage. He also made sure that not to show the piercing saloon as well. I explained to him that it would make people come not just for a tattoo but to get their piercing done as well and so allowed me to film but not to show too much and just focus on the tattoos and the store. ...read more.

Creating the right track for the promotional video was a big issue. We couldn't just get a track from our favourite groups that would be copyrighting and would lead to legal issues. The editor of the production decided to create his our track that would fit in to our promotional video. We made sure that the track would fit in to the narrative of the video. This did set us back a day of editing but the next day we were back on track. The editor created four different tracks with each different genre. The first track was a rock genre, we wanted a rocky song so the audience could relate to the track, the second track was a funky house genre with a up beat tempo and lively theme. Conclusion To conclude my promotional video I think that we did meet our audience, client and also target brief. The main objective was to make a promotional video which would successfully promote a company. The key skills I have gained from making this promotional video was the key technique to selling and promoting the company at the same time while targeting all the audience, making the promotional video; appealing, enjoyable to watch, interesting, informative and eye catching. ?? ?? ?? ?? Promotional and Corporate Video ...read more.