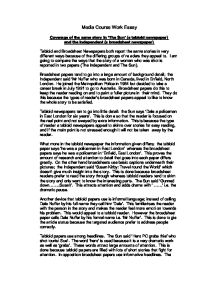 Media Course Work Essay Coverage of the same story in 'The Sun' (a tabloid newspaper) and the Independent (a broadsheet newspaper) Tabloid and Broadsheet Newspapers both report the same stories in very different ways because of the differing groups of readers they appeal to. I am going to compare the ways that the story of a woman who was shot is reported in two papers (The Independent and The Sun). Broadsheet papers tend to go into a large amount of background detail; the Independent said 'Mr Nuffer who was born in Canada, lived in Enfield, North London. He joined the Metropolitan Police in 1984 but decided to take a career break in July 1991 to go to Australia. Broadsheet papers do this to keep the reader reading on and to paint a fuller picture in their mind. They do this because the types of reader's broadsheet papers appeal to like to know the whole story to be satisfied. Tabloid newspapers ten to go into little detail: the Sun says 'Dale a policeman in East London for six years'. This is done so that the reader is focused on the real point and not swayed by extra information. This is because the type of reader a tabloid newspapers appeal to skims over stories for easy reading, and if the main point is not stressed enough it will not be taken away by the reader. ...read more.

Another way that tabloid papers put forward their biases is by using loaded words. The Sun said 'gunned down'. This implies to the reader that a ruthless action took place, which left the woman down and helpless. The makes the readers biases god hand in hand with The Sun's. The Independent on the other hand uses neutral language and states 'she was shot in the stomach'. This does not put the blame on any party but simply states that the action taken place. This adds fluency to the story by not throwing the blame in one direction at a hasty speed then going neutral and then throwing blame at the believed guilty party as tabloid papers can do. Tabloid papers also use more monosyllabic words than broadsheet papers, which use more polysyllabic words. In The Sun it uses words like 'kill', 'mad', 'guy', 'rough stuff'. Monosyllabic words are used more often in tabloid papers as it makes it easy for the reader to understand the plot and does not confuse them with in depth, polysyllabic words. This also reflects on the intended reader in that they buy the paper for a quick easy read rather than an in depth read. The Independent uses words such as 'visitors', 'English', 'fashionable', 'probably' and this is because the target audience are looking for more of a challenging read than tabloid papers offer. ...read more.

In contrast tabloid papers use exaggerated captions. The Sun uses this caption 'gunned down Susan Kirkby'. This is done as tabloid papers assume readers don't spend much time reading, that they skim and look at the pictures and if the caption is shocking and captures their attention they will read the article. Finally, tabloid papers use strong openings and strong endings. The Sun starts the article off with 'British bobby Dale Nuffer risked his life'. This catches the reader that is skimming attention and makes them continue reading. The Sun ends with 'a 22 year old man was charged with attempted murder'. This leaves a message with the reader as to what the outcome of the story is. In opposition to this broadsheet papers use factual openings and informative endings. The Independent starts with ' An English woman was shot'. This informs the reader of the most important facts before they carry on reading the article or decides not to. The article ends by saying 'Mr Nuffer was born in Canada, lived in Enfield'. This is at the end because the less important details are left until the end so that the reader does not miss the important points if they decide not to read the whole article. In conclusion I have found that both articles using these different devices have completely altered the story and they no longer seem like the same story. I think tabloid papers target less intelligent people than broadsheet papers who target more intelligent people. ...read more.