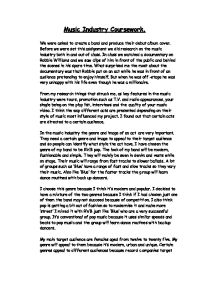 Create a band and produce their debut album cover.

Music Industry Coursework. We were asked to create a band and produce their debut album cover. Before we were set this assignment we did research on the music industry both in and out of class. In class we watched a documentary on Robbie Williams and we saw clips of him in front of the public and behind the scenes in his spare time. What surprised me the most about the documentary was that Robbie put on an act while he was in front of an audience pretending to enjoy himself. But when he was off-stage he was very unhappy with his life even though he was a millionaire. From my research things that struck me, as key features in the music industry were tours, promotion such as T.V. and radio appearances, your single being on the play list, interviews and the quality of your music video. I think the way different acts are presented depending on their style of music most influenced my project. I found out that certain acts are directed to a certain audience. ...read more.

You would not see or hear any classical music on these programmes because it doesn't appeal to a young audience and if they did mix the music genre the amount of viewers and listeners would definitely fall. The name of my band is 'Riders'. I choose this because it's modern and cool but also urban and dangerous. This is why it would appeal to my target audience because it doesn't sound too cheesy or too pop. My target audience are likely to be into the latest high street fashion so my band will be dressed in the latest fashionable gear. Their style will be modern, casual and they will wear a lot of denim. The characters of my band members will be cool, friendly and humorous. They will come across like this so they seem loveable and safe. They need to come across like this so they appeal to younger members of my target audience who would feel intimidated if the band members had too much of a bad boy image. ...read more.

The advantages of signing up to a major record company is that you will get a lot of promotion such as T.V. appearances, radio play and magazine interviews. You are also likely to get into the top end of the singles chart which means you can make a lot of money off your single. The disadvantages are you are rushed to meet your release date deadline and you don't have a lot of control on what your music is going to sound like. You are also likely to have a busy schedule because of promotion around the country, which means a lot of time away from home. I have decided that signing up with a major record company would be better for my band. I have chosen major because they grab the attention of my target audience better through promotion. This promotion such as T.V. appearances, magazine interviews and radio play are very popular among my target audience so they will not miss them. Although they will have a busy schedule, they are very likely to make a lot of money. Where as if they were with an independent record company they would probably need another job apart from making music to make a living. Stacey Palmer. ...read more.