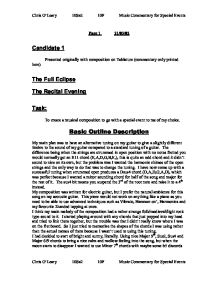 Create a musical composition to go with a special event of my choice.

Page 1 21/03/02 Candidate 1 Presented originally with composition on Tablature (commentary only printed here) The Full Eclipse The Recital Evening Task: To create a musical composition to go with a special event to me of my choice. Basic Outline Description My main plan was to have an alternative tuning on my guitar to give a slightly different timbre to the sound of my guitar compared to a standard tuning of a guitar. The difference being when the strings are strummed in open position with no notes fretted you would normally get an E11 chord (E,A,D,G,B,E,), this is quite an odd chord and it didn't sound to nice on its own, but the problem was I wanted the harmonic chimes of the open strings and the only way to do that was to change the tuning. ...read more.

So I just tried to memorize the shapes of the chords I was using rather than the actual names of them because I wasn't used to using this tuning. I had decided to start of bright and sunny, literally. Using nice Major 9th, Sus2, Sus4 and Major 6/9 chords to bring a nice calm and mellow feeling into the song, but when the moon starts to disappear I wanted to use Minor 7th chords with maybe some b5 discords to make it sound like the end of the world but then suddenly link straight back into the warm summers day sound, as if nothing had ever happened. My composition developed from the starting key of D Major but then also centralises the root key to be D minor half the way through but then refers back to the original key of D Major. ...read more.

In the middle as well, I make it sound quite a dark piece with b5's and this makes it like the pitch black middle of the block out of the sun. I then got told I wasn't allowed to make it a theme based on a thing that wasn't going to happen to me in the near future or I would have marks taken off for that. So I decided that I would aim for the recital evening which was coming up next month. I tried to repeat the motif or riff a few times at the start of the song to bring it in with a remembrance of the tune when I went into the middle and then brought it out with an expanded tune just slightly more complicated this time round. ?? ?? ?? ?? Chris O'Leary 10Sa2 10F Music Commentary for Special Events Chris O'Leary 10Sa2 10F Music Commentary for Special Events ...read more.