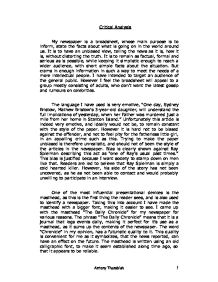 Critical analysis of a broadsheet newspaper.

Critical Analysis My newspaper is a broadsheet, whose main purpose is to inform, state the facts about what is going on in the world around us. It is to have an unbiased view, telling the news as it is, how it is, without distorting the truth. It is to remain as factual, formal and serious as is possible, while keeping it simplistic enough to reach a wider audience, with short simple facts about the situation. But crams in enough information in such a way to meet the needs of a more intellectual people. I have intended to target an audience of the general public. However I feel the broadsheet will appeal to a group mostly consisting of adults, who don't want the latest gossip and rumours on celebrities. The language I have used is very emotive, "One day, Sydney Bristow, Mathew Bristow's 3-year-old daughter, will understand the full implications of yesterday, when her Father was murdered just a mile from her home in Stanton Island." ...read more.

One of the most influential presentational devices is the masthead, as this is the first thing the reader sees, and is also used to identify a newspaper. Taking this into account I have made the masthead with a bigger font, making it easier to see. I came up with the masthead "The Daily Chronicle" for my newspaper for various reasons. The phrase "The Daily Chronicle" means that it is a journal that logs events daily, making it perfect for it's use as a masthead, as it sums up the contents of the newspaper. The word "Chronicle" in my opinion, has a futuristic quality to it. This quality is convenient for me as it symbolizes, that the news reported, can have an effect on the future. The masthead is written using an old calligraphic font, to make it seem established along time ago, so that it appears to be reliable. ...read more.

All of my pictures are in colour to make them eye-catching. The main picture on the front-page would not usually be put on a broadsheet, in the interest of its readers, because of its violent and explicit nature. However tabloids use such tactics, by putting shocking pictures of murders or a half naked celebrity to pull attention and boost sales, precisely the job of the provocative page 3 girls in the Sun. I wanted the picture to have the same appeal to readers, and boost sales. My attempt to make the article as factual as possible was a success, as I included some statistics, "The damage caused by him in the last year alone has summed up to a total of at least �4,000,000" which may have alarmed readers. The start of the article was also very factual, "Ray Spielman, a convict aged 27, has escaped while he was being transferred to Staunton Maximum Security Prison yesterday, at about 9:45pm." Antony Thambiah 1 ...read more.