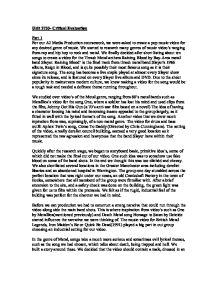 Critical Evaluation of AS media Production

Unit 2733- Critical Evaluation Part 1 For our A2 Media Production coursework, we were asked to create a pop music video for any desired genre of music. We started to research many genres of music video's ranging from rap and hip hop to rock and metal. We finally decided after short listing about ten songs to create a video for the Thrash Metal anthem Raining Blood by Bay-Area metal band Slayer. Raining Blood" is the final track from thrash metal band Slayer's 1986 album, Reign in Blood, and is quite possibly their most famous song as it is their signature song. The song has become a live staple played at almost every Slayer show since its release, and is featured on every Slayer live album and DVD. Due to the sheer popularity in mainstreem modern culture, we knew making a video for the song would be a tough task and needed a definate theme running throughout. We studied over video's of the Metal genre, ranging from 80's metal bands such as Metallica's video for the song One, where a soldier has lost his mind and used clips from the film, Johnny Got His Gun (a 70's anti-war film based on a novel) The idea of having a character loosing his mind and becoming insane appealed to the group largely, as it fitted in well with the lyrical theme's of the song. ...read more.

One prior idea that we were keen on doing was having a large crowd of people in the band shots, such as in the video for Slipknots song Duality, yet we couldn't get people to come due to conflicting available time slots. Part 2 A convention of certain genre's of music, such as Hip Hop, is to be glamourous and look sharp, such as in the video Lost One by Jay Z. In this particular video, the artist is shown is highly expensive "bling" and is rapping next to high status sports cars. Yet in the genre of Metal, or even rock, video's generally show a more rough edge and darker tone. This is evident in such video's as Everlong by Foo Fighters, where two characters are stuck in parralell nightmares. The artist in our video, Slayer, is represented as evil, unforgiving and serious. One of the ways that we contributed to keeping the tone of the video as serious was the facial expressions of the band, in particular the singer. We instructed the actor to keep a very serious face, and to look sinister at times, something that was portrayed very well. We represented the protagonist in a way that he would be alien to the heavy music of slayer, through the use of old fashioned dress code and a more "nerdy" outfit. ...read more.

Magazine's would also help the promotion of the new video, such magazines of Metalhammer, Kerrang and Terrorizer regulary feature Slayer in there publications. We previewed our video to some of the other media groups that had made other genre's of music video's such as Gnarles Barkley and Duffy. All the feedback we received was very good, and many people thought the video had a good mix of Heavy Metal connotations, yet still kept its feet on the ground and didn't get too "tounge in cheek". This was something we really aimed to avoid, as many video's are too sterotypically of that genre. It's not uncommon in Metal Video's for a production to have a low budget, as more focus is put on selling albums, merchandise and live tickets. This is a direct reason as to why many bands of the genre don't realse more than one or two singles. For example, on one of the most famous Metal albums of all time, Master of Puppets by Metallica, no video's were made. Yet in modern music, the genre is becoming more uptadate in making more video's, such bands as Slipknot, Lamb of God and Devildriver are leading the way. In today's music business, many bands are turning to the internet as a way of gettong their video's or songs across, yet as much as Slayer are already a huge name within the business, I still think the video would benefit ...read more.