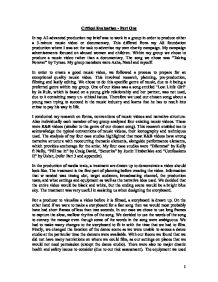 Critical Evaluation - Part One In my A2 advanced production my brief was to work in a group in order to produce either a 3-minute music video or documentary. This differed from my AS foundation production where I was set the task to advertise my own charity campaign. My campaign advertisements focused on abused women and children. Within my group we chose to produce a music video rather than a documentary. The song we chose was "Taking Forever" by Tyrese. My group members were Asha, Natel and myself. In order to create a good music video, we followed a process to prepare for an exceptional quality music video. This involved research, planning, pre-production, filming and lastly editing. We chose to do this specific genre of music, due to it being a preferred genre within my group. One of our ideas was a song entitled "Lost Little Girl" by Ja Rule, which is based on a young girls relationship and her partner, was not used, due to it containing many un- ethical issues. Therefore we used our chosen song; about a young man trying to succeed in the music industry and learns that he has to result into crime to pay his way in life. I conducted my research on forms, conventions of music videos and narrative structure. Also individually each member of my group analyzed four existing music videos. These were R&B videos (similar to the genre of our chosen song). This research enabled me to acknowledge the typical conventions of music videos, their iconography and techniques used. The analysis of my four case studies highlighted that most R&B videos have strong narrative structure with reoccurring thematic elements, alongside performance elements, which provides anchorage for the artist. My four case studies were "Dilemma" by Kelly ft Nelly, "Fill me in" by Craig David, "Senorita" by Justin Timberlake and "Confessions II" by Usher, (refer Part 3 and appendix). ...read more.

Also the mise-en-scene of the key shots was vital, for example in our video Eric (main actor) mugs a girl, this not only connotes how desperate he is, to get money to accomplish his ultimate dream of fame. Also it is in contrast to the conventional materialistic music video theme. In our video we used realism as a style, instead of the conventional escapism and it ties in with Goodwin's framework (1993) analysis, for example during the mugging scene the audience is aware that, even though he feels it is wrong to result to such measures, he has no choice and has to do what he has to do, his facial expressions connote his sadness. The entire video is filtered in black and white; representing a flashback of Eric's story from rags to riches, it is gritty and naturalistic which connotes realism in more depth. Camera angles varied, but consisted mainly of close-ups and mid-shots, this allows the audience to understand the narrative clearly. The establishing shot is of a building, and is followed by several close-ups and mid-shots, which connote the intense emotion between the agent and Eric. This also denotes Eric's frustration towards the situation, and he coverts the fame that is denied him. The clothing of the agent in this scene is formal to emphasise, that the relationship between the two characters is strictly business. The lighting and clothing that Eric wears in the mugging scene, is dark which might connote malignant behavior, Levi Strauss (1949). The editing is conventional when the mellow music is more prominent in the video the shots are more gradually cut and dissolved. The editing is also connected to the message, fast paced at the dramatic sequence when the protagonist is stealing. The cuts of Eric in the recording booth and the dancing shot, is repeated in both of the choruses, we superimposed the text to explain the images, and create an impact which allows the audience to enjoy as well as understand the video. ...read more.

Though we used conventions of having the walled reality as black and white and having the escape in colour at the end allowed the audience to clearly identify what the protagonist deals with and what he yearns for in his mind. To maintain audience satisfaction we involved what may be described as "aesthetically pleasing" aspects, this was reinforced by my feedback. By co-operating the unconventional social statement with the conventional need for eye satisfaction, for example, editing the camera angles to the beat of the music. As stated by Roe and Lofgren (1988) stated that music videos are similar to radio, where the sound is more important than the visuals, audiences view music videos in secondary mode whilst attending to other things, e.g. eating. To sell music videos, some male artists promote s*x through the way they dress e.g. Usher "Confessions II", he takes off his vest in the video. In our video we promote entertainment by giving Eric control over the screen and at the same time appeal to our target audience, music video audiences are mainly adolescents and young adults as they are frequent viewers, and whilst conducting my focus group, I found this to be the case as the participants were adolescent and young adults. The audience endures some suffering through empathy for our male protagonist and subsequently shares his elation and sensation when in the openness and natural environment. If the song is successful and requests for the R&B video's viewing prove to be of a high rate then this results in a profit-making institutional-consumption paradigm. This will be an accomplishment for we will have fulfilled one of the main objectives behind the promotional video, to successfully promote the song, consequently gaining profit. Of real achievement is the product itself, it is a polysemic presentation of alternative ideology. It alternatively contains a narrative but unconventionally this narrative is led by the addressing of a bold topic of poverty and the entrapment associated with money. ?? ?? ?? ?? 1 ...read more.