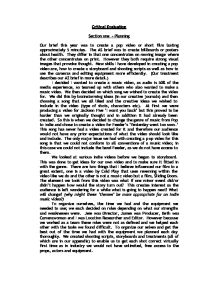 Critical Evaluation Section one - Planning Our brief this year was to create a pop video or short film lasting approximately 5 minutes. The AS brief was to create billboards or posters about health. They differ in that one concentrates on moving image where the other concentrates on print. However they both require strong visual images that provoke thought. New skills I have developed in creating a pop video are, how to create a storyboard and shooting scripts as well as how to use the cameras and editing equipment more efficiently. (Our treatment describes our A2 brief in more detail.) I decided I wanted to create a music video, as audio is 50% of the media experience, so teamed up with others who also wanted to make a music video. We then decided on which song we wished to create the video for. We did this by brainstorming ideas (in our creative journals) and then choosing a song that we all liked and the creative ideas we wished to include in the video (type of shots, characters etc). At first we were producing a video for Jackson Five 'I want you back' but this proved to be harder than we originally thought and in addition it had already been created. So this is when we decided to change the genre of music from Pop to Indie and chose to create a video for Feeder's 'Yesterday went too soon.' ...read more.

Music videos are often playful, experimental and usually about stretching the boundaries of 'realist(ic)' style. In a way we have done this by using the rewinding shots and the slowing down of the falling orange juice glass. The narrative of our video is about a guy who has a regular, mundane routine of waking up, getting dressed and going to catch his bus, we look at what would happen should this vicious circle break and as it turns out his life become better because of it (He meets up with the love of his life). This is parallel to the music as the song is of similar content where its lyrics can be interpreted in many ways. For this video to work we needed to capture the audience's attention to do this we used another convention of music video which is the visual hook. This is where a close up of the band is used to keep the audience's attention. In our case we used the extreme close up of the guy's eyes right at the beginning of the video. It goes on longer than a normal video clip would to establish the fact that he had just woken up and so essentially throws the audience right into the video. (Do we see him again? How does this develop image?) A variety of styles ranging from realism to symbolism have been used within our film, for example when the glass breaks. ...read more.

We next wanted to see if people could see where our influences had come from. Although no one in the focus group figured it out they came up with their own they we felt were just as appropriate. Some of them include the film; Run Lola Run and Craig David's single 7 Days. Another point we could not agree on as a group was whether or not to have more shots of the girl in the video to establish her character and the focus group it seems had mixed views as well. Some said there should be more of her to enable the viewer to understand the narrative more yet others said that the video worked well just concentrating on the one character, so that issue is left unresolved. In addition to the above problem our group could not decided whether to leave the sound effects (that appeared by accident) or to cut them out so we decided to leave them in and see what our audience thought of them. Most thought that they should have been left out because they didn't really fit in and I am inclined to agree. (Also they take away the focus from the music) To finish off the feedback session we asked for people's general opinions on our video. For example whether they liked it or not and why they did or did not like it. Most found the idea interesting and original with a play on the essentially simple narrative. ...read more.