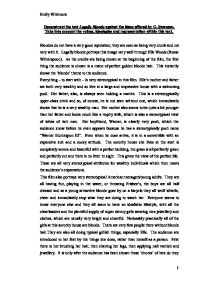 Deconstruct the text Legally Blonde against the ideas offered by G. Swanson. Take into account the values, ideologies and representation within this text. Blondes do not have a very good reputation; they are seen as being very dumb and not very with it. Legally blonde portrays this image very well through Elle Woods (Reese Witherspoon). As the credits are being shown at the beginning of the film, the first thing the audience is shown is a mane of perfect golden blonde hair. This instantly shows the 'blonde' theme to the audience. Everything - to start with - is very stereotypical in this film. Elle's mother and father are both very wealthy and so live in a large and impressive house with a swimming pool. Her father, also, is always seen holding a martini. This is a stereotypically upper-class drink and so, of course, he is not seen without one, which immediately shows that he is a very wealthy man. Her mother also seems to be quite a bit younger than her father and looks much like a trophy wife, which is also a stereotypical view of wives of rich men. Her boyfriend, Warner, is clearly very posh, which the audience know before he even appears because he has a stereotypically posh name "Warner Huntington III". ...read more.

blonde. So it is clear that Warner is saying she is a stereotypical blonde, and that is not what he needs. It is at this point that the 'emphasised body' comes into it, because when she asks him why he is doing this she says "what, my b***s are too big?" and she also says "all people see when they look at me is blonde hair and big b***s" the fact that she mentions it twice draws attention to it and gives her that 'emphasised body'. When she first arrives at law school, the first comment made about her is "check out Malibu Barbie" which is another derogatory term which also refers to her looks and her body as, of course, Malibu Barbie is blonde with a highly 'emphasised body'. She also, throughout the film, shows many childlike qualities, for example when she is opening an envelope at the beginning of the film, she has a look of intense concentration on her face. Only young children might find they have to concentrate when opening an envelope. She also uses childish vocabulary at times, for example, when she has gone to see a brunette woman, she says "did you see the icky brown colour of her hair?", and when she and Emmet are talking, she calls him a butthead which is a word people use when they are about five years old. ...read more.

This is one of the main turning points in the film, when a dark haired male is beaten by a blonde female. This instantly puts the theory of the 'dumb blonde' out the window, because he is now no longer 'better' than her. She is now beautiful and she is intelligent which puts her at the same level as him, but she proved she can beat him so she is now above him. She then goes on to put herself above the man who is in charge by taking over him in representing their client in her murder trial and she then goes on to solve the case in a very short amount of time. This film supports and shows Gillian Swanson's theory on what attributes blondes must have. They are all shown through Elle Woods throughout the film, even when she is being a serious law student and is winning a murder trial. She still shows childishness and naivety when she is questioning the daughter and all of the other attributes too. However despite the fact that she has these attributes, she still comes out on top, and is no longer a 'dumb blonde', she is, at the end of the film, simply a blonde. ?? ?? ?? ?? Emily Whitmore 1 ...read more.

A very good essay, although sometimes the language is a bit too informal and it detracts from the insightful nature of what is being said.