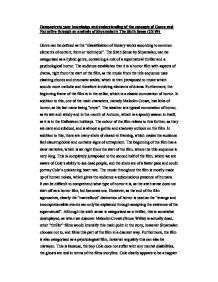 Demonstrate your knowledge and understanding of the concepts of Genre and Narrative through an analysis of Shyamalan's The Sixth Sense (US 99) Genre can be defined as the "classification of literary works according to common elements of content, form or technique". The Sixth Sense by Shyamalan, can be categorised as a hybrid genre, containing a mix of a supernatural thriller and a psychological horror. The audience establishes that it is a horror film with aspects of drama, right from the start of the film, as the music from the title sequence uses clashing chords and chromatic scales, which is then juxtaposed to music which sounds more melodic and therefore involving elements of drama. Furthermore, the beginning frame of the film is in the cellar, which is a classic connotation of horror. In addition to this, one of the main characters, namely Malcolm Crowe, has links of horror, as his last name being "crow". The weather is a typical connotation of horror, as its wet and windy and in the month of Autumn, which is a spooky season in itself, as it is in the Halloween holidays. The colour of the film relates to this further, as they are dark and subdued, and is almost a gothic and shadowy outlook on the film. ...read more.

Depicting the genre of a film can also help the audience select what type of film they would like to see. The film the sixth sense, appealed to women as much as it did to men, and it was notable that the audience seeing this film were mainly older women and younger boys, which was very unusual for a horror genre to do. This could have explained the reason why this film was so successful. The reason why it appealed to women as well as men could have been the fact that the film was not only about horror and ghosts, but also conflicts and dilemmas that are seen in everyday life, and this type of film generally appeals to a woman's genre. On a closer look at the film, the audience are aware of the smaller storylines that are surrounding the main storyline, for example Cole's mother Lynn in tatters between her love for her child and her confusion over her "disturbed" son. Using these smaller storylines, the film could be described as a melodrama, as it is rather emotional and more of a family drama. Another feature in the film, which could prove the existence of a melodrama, is the fact that there are four narrators rather than one and this is a key element of a melodrama. ...read more.

Moreover, this shows that Shyamalan has created two narratives, one for the first time viewer, and then one for the second time viewer, who are then aware that Malcolm is dead and so, looks for clues such as if he's wearing the same clothes throughout the film. Also, the fact that there is a continuity of revelations, for example, Malcolm getting shot, Cole hearing voices and seeing dead people, portrays that the majority of the narrative is driven by enigma, which keeps the audience captivated and in suspense. Shyamalan also cleverly uses continuity editing in order to weaken the narrative. For example, when Malcolm and Lynn are waiting for Cole to return from school, there chairs are facing each other, which to the primary viewer appears that they are interacting, but in a closer look, Shyamalan has missed out any shot and reverse shots between them two and therefore shows no character interaction. As the plot and sub plots (those being the relationship between Malcolm and Anna, and between Cole and his mother), come to an end, the film ends with a closure, for example Cole being happy and accepting the ghosts, and Malcolm fixing his relationship and helping a boy, as all the questions asked by the narrative have been answered, and a sense of finality has come to the film. ...read more.