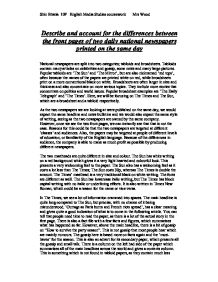 Describe and account for the differences between the front pages of two daily national newspapers printed on the same day National newspapers are split into two categories; tabloids and broadsheets. Tabloids contain many articles on celebrities and gossip, some news and many large pictures. Popular tabloids are 'The Sun' and 'The Mirror', but are also nicknamed 'red tops', often because the names of the papers are printed white on red, while broadsheets print on a more conventional black on white. Broadsheets are often larger in size and thickness and also concentrate on more serious topics. They include more stories that concentrate on politics and world issues. Popular broadsheet examples are 'The Daily Telegraph' and 'The Times'. Here, we will be focusing on The Times and The Sun, which are a broadsheet and a tabloid respectively. As the two newspapers we are looking at were published on the same day, we would expect the same headline and news bulletins and we would also expect the same style of writing, seeing as the two newspapers are owned by the same company. However, once we see the two front pages, we can instantly see that that is not the case. ...read more.

This is an idiomatic pun as Chelsea's colours are blue, and to feel blue is to feel down, and as Chelsea had just lost a game it sounds quite amusing to those who watch sport. The sport section of the Times seems much more advertised than that of The Sun, as the Sun's sporting section has a small advert under the masthead. In comparison, The Times' sporting advert takes up the entire right hand side. In The Sun, we can see an example of an 'easy to understand' language as there is a huge headline: "Bang 'em up!", which contrasts the style used in The Times. This kind of language - slang and abbreviation - is there for the purpose of attracting the reader and wanting to know what they mean by the headline. The headline is likely to be a quote, which also attracts people who wish to know of public opinion, so people like MPs could actually benefit from reading The Sun. The subheading itself is, "7/7 mum urges MPs to back Blair on terror law". This heading makes a few assumptions that people know who 'Blair' refers to, what 'MP' stands for, and what happened on the 7th July. ...read more.

I feel that there is a smaller advert for the sport in The Sun because it expects its readers to know about the sporting section and assumes it to be a regularity for its readers. However, in The Times, a big sport section is probably rare, and therefore it wants its readers to take notice. Overall, I think that The Sun is for the working class with little time to read the newspaper and wants to read about sports and glamour. The Times is more for people with time to read about facts and world news, but has no general interest in sport or celebrity life, and is therefore has a higher class target audience. We can tell this from the language they use in the two papers, and the selection of what they put on the front page. I believe that a comparison of what the two papers put on the Harry Potter premiere is a good example of how much the papers care about celebrity, and also The Sun puts in a smaller advert but dedicates more pages to sports, which is an opposite to The Times. The language is also much more formal in The Times, which also gives an indication of the audience it is aimed at. ?? ?? ?? ?? Shin Bhatia 10P English Media Studies coursework Mrs Wood ...read more.