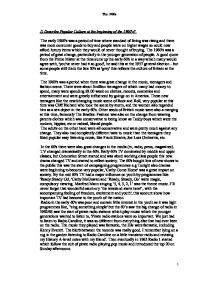 Describe Popular Culture at the beginning of the 1960's?

1) Describe Popular Culture at the beginning of the 1960's? The early 1960's was a period of time where standard of living was rising and there was more consumer goods to buy and people were on higher wages so could now afford luxury items which they would of never thought of buying. The 1960's was a period of great change, particularly in the younger generation of people. A good quote from the Prime Mister at the time sums up the early 60's in a way which many would agree with, 'you've never had it so good', he said this at the 1957 general election - but some people still think the late 50's as 'grey' this reflects the culture of Britain at the time. The 1960's was a period when there was great change in the music, teenagers and fashion scene. There were about 5million teenagers of which many had money to spend, many were spending �8.00 week on clothes, records, cosmetics and entertainment and were greatly influenced by goings on in America. These new teenagers like the new/changing music scene of Rock and Roll, very popular at this time was Cliff Richard who took the scene by storm, and the women also regarded him as a s*x object in the early 60's. Other seeds of British music were also a merging at this time, famously The Beatles. Fashion was also on the change from wearing parents clothes which was conservative to being know as Teddy boys which were the rockers, hippies, etc or radical, liberal people. The adults on the other hand were all conservative and were pretty much against any change. They also had completely different taste to music than the teenagers they liked popular easy listening music, like Frank Sinatra, Joe Loss Orchestra, etc. In the 60's there were also great changes in the media (tv, radio, press, magazines). T.V changed dramatically in the 60's. ...read more.

As the 1960's progressed big business saw opportunities to make big amounts of money. Record companies were now emerging from the 60's these included Island Record Company owed by Chris Blackwell and Richard Branson also came about in the late 60's and formed Virgin who went on to sign The Rolling Stones, s*x Pistols and made him a very rich man. The development of this culture owed much to The Beatles who were in many ways the symbol of the 1960's and made a tremendous impact on all of western culture. 3) To some people the 1960's were the best of times, to others it was a period when many things went wrong in society. Why do people have such different ideas about the 1960's? People have such different opinions about the 1960's because some people liked change and some didn't, some people would just go with the flow whereas others didn't want to. It mainly depend on their age and if they liked change because they either liked the sixties or hated it. There are many things, which could regard the sixties as a good decade, and many things, which could regard the sixties as a time when society went wrong. As one person put it, 'it was very heaven to be alive' and other people had different opinions on where the sixties were going, 'The whole drug scene scared me. I think I thought, if I get into this at all, I'll get into it in a deep, deep way. And I don't like losing control. The people I knew in the drug scene were kind of scary people; criminal underground rather than alternative underground', this was an opinion which many people in 60's had. The 60's was a period of major change that invited many different feelings and emotions. There are a number of reasons for these differences; music, fashion, media to name just a few. ...read more.

The worst aspect of the labour party in the 60's was that of in 1967 of the 6-day war against Israel, which increased, their power and size and many people see this to be the worst aspect of the sixties. Also the Vietnam War caused great criticism with many protests. The changes during the labour government are view different but it depends on your political view. The sixties was a symbol of great change in many forms, and you either like it or didn't. The 60's caused changes, which created many different reactions. The drug culture, which was in many aspects of the sixties, was a crucial change as it caused great tension in the older generation of people. There was also a great alter in peoples perceptions of what is important in life and the 60's was a period when many challenged status quo and establishment. The increase in importance of youth culture was very important with the music, mods, rockers and hippies which not only appear to reject all forms of confrontation, but their behaviour suggested a weakening of society and the family in particular, but it was just harmless fun to many. There was also a great decline in conservatism and a growth of racial ideas. Source H shows how the olds didn't like the change of youth culture, "Today youth has money, and teenagers have become a power. In their struggle to impose their wills upon an adult world, young men and women have always been blessed with energy, but never until now, with wealth." This sums up the attitudes of many old people on the youth during the sixties. The sixties and seventies were decades of the young, unlike now where the olds have gain status back, this was properly due to the population pyramid as the number of young people born after the war was very high meaning more people to help causes change. ?? ?? ?? ?? The 1960s 1 ...read more.