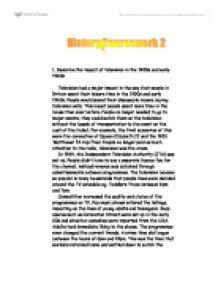 1. Describe the impact of television in the 1950s and early 1960s Television had a major impact in the way that people in Britain spent their leisure time in the 1950s and early 1960s. People would spend their disposable income buying television sets. This meant people spent more time in the house than ever before. People no longer needed to go to major events, they could watch them on the television without the hassle of transportation to the event on the cost of the ticket. For example, the first scenarios of this were the coronation of Queen Elizabeth II and the 1953 'Matthews' FA Cup Final. People no longer paid as much attention to the radio, television was the craze. In 1954, the Independent Television Authority (ITA) was set up. People didn't have to pay a separate licence fee for the channel, instead revenue was obtained through advertisements between programmes. The television become so popular in many households that people lives were decided around the TV schedule eg. Toddlers Truce between 6pm and 7pm. Competition increased the quality and choice of the programmes on TV. Pop music shows entered the listings, impacting on the lives of young adults and teenagers. Soap operas such as Coronation Street were set up in the early 60s and situation comedies were imported from the USA. Adults took immediate liking to the shows. ...read more.

Many people phoned the BBC to complain. They believed the jokes were unfair and not suitable for television. In the late 60s discreet s*x scenes became more frequent. Programmes portrayed affairs, s*x before marriage etc,. The BBC was criticised by some people for encouraging immorality. One lady, Mary Whitehouse believed the BBC was in place to promote Christian principles and criticised television broadcasts for failing to censor the programmes in which it transmitted. Elderly people were more offended by certain TV programmes so those people made the most criticisms. These people were used to laid back programmes in a world where crime, violence and poking fun at people wasn't portrayed. When they saw programmes containing such material they became upset because they weren't used to it and didn't expect things like murder to happen on their screens. They criticised the broadcasts and often complained. They wanted life to be shown as how they wanted it to be rather than what it actually was. Cinemagoers criticised television for encouraging people to stay at home, rather than go out. They believed it wasn't healthy spending evening after evening sitting at home. People believed that the television was spoiling socialising and night-life because people were quite prepared to slump into a chair and watch television all week. Many television critics accused programme makers of lowering standards of language and decency and glorifying violence and crime. ...read more.

People started returning to the cinema and going out. Children were well considered in programmer's minds in the 1970s. Pop music shows and children's films were shown. In the 1950s very little was aimed at children or teenagers. The nearest programme was the Six Five Special. Imported shows were much more common in the 1970s than the 1950s. A lot of comedies and sitcoms were brought over from America. In the 1950s only a few American shows were broadcast, the majority on ITV. Live sport events were shows on TV in the 1950s. However they were few and far between. The only real sport matches shown were the F.A Cup Final, The Boat Race, Wimbledon, Test Match Cricket and The Grand National. However by the 1970s football league matches (highlights), rugby matches, Formula 1 racing, athletics, league cricket, golf etc, was broadcasted. In conclusion, television broadcasts in the 1970s were very different to those of the 1950s. Reception, picture quality, aerial range and transmitters had been improved by the 1970s. More people had TV sets in the 1970s and more channels available. In the 1950s TV sets had been considered to be own by the richer of the population. By 1970 only the very poor did not own a TV in any shape or form. Comedies topped the ratings in the 70s compared to the documentaries and serious plays of the 1950s. By 1979 a consortium were planning to introduce a new terrestrial television channel because of the popularity of television. Channel Four was aired shortly after. ...read more.

***** A clear and well written history of the development of British television between the 1950s and 1970s. Many of the debates for and against the benefits of television are documented here. This essay could be expanded by adding in a discussion of theories such as the Media Effects debate, Uses and Gratifications and the issue of Moral Panics.