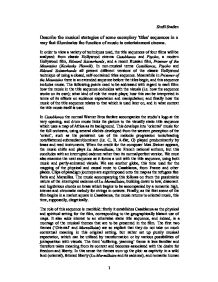 Describe the musical strategies of some exemplary 'titles' sequences in a way that illuminates the function of music in entertainment cinema.

Sho�l Stadlen Describe the musical strategies of some exemplary 'titles' sequences in a way that illuminates the function of music in entertainment cinema. In order to view a variety of techniques used, the title sequences of four films will be analysed: from classic Hollywood cinema Casablanca and Psycho, a modern Hollywood film, Edward Scissorhands, and a recent Russian film, Prisoner of the Mountains (Kavkazky Plennik). In non-musical terms Casablanca, Psycho and Edward Scissorhands all present different versions of the classic Hollywood technique of using a closed, self-contained titles sequence. Meanwhile in Prisoner of the Mountains there is an extended sequence before the titles begin, and this sequence includes music. The following points need to be addressed with regard to each film: how the music in the title sequence coincides with the visuals (i.e. how the sequence works on its own); what kind of role the music plays; how this can be interpreted in terms of its effects on audience expectation and manipulation; and finally how the music of the title sequence relates to that which is used later on, and in what context the title music itself is used. In Casablanca the normal Warner Bros fanfare accompanies the studio's logo at the very opening, and drum music links the picture to the visually static title sequence which uses a map of Africa as its background. This develops into 'oriental' music for the full orchestra, using several clich�s developed from the western perception of the 'orient', such as the persistent use of the melodic progression tonic/leading note/flattened-submediant/dominant (i.e. C, B, A-flat, G) played predominantly by brass and reed instruments. When the credit for the composer Max Steiner appears, the music shifts and plays La Marseillaise, the French national anthem, but this concludes with an interrupted cadence rather than its normal perfect version. We must also examine the next sequence as it forms a unit with the title sequence, using both music and partly-animated visuals. ...read more.

The horror genre is thereby indicated, but the music's insistent intensity hints at the obsessively psychological nature of Hitchcock's art. The influence of this titles music on the rest of the film is subtle. The first scene is entirely removed from it by mood, if not completely by musical language, a feature that unifies the entire score and film. The first time the titles music is reused is when Marion realises that her boss has seen her driving her car after she had told him that she was going straight home to bed. The fright she suffers, and the effort with which she suppresses it in order to force a smile at her boss, seem to initiate the return of the violent double-stopped ostinati of the titles. Here there is a meaning attached to a mood which we understand to be the essence of the film: the music is in some way linked to the Marion's subjectivity and also the insistent technology of the car. Marion is shown to be a transgressive woman, and this raises the expectation that Marion herself may be the psycho: she has a headache; she hears voices in her head; she has stolen money; she drives - a masculine pastime in most films; and accordingly her fright is expressed not through Romantic scherzo music but by this horror music. This expectation is, of course, entirely false. Meanwhile the explicit violin theme of the titles is used to fill the screen just as Marion's face does as we watch her watching the road, amounting to a nullification of any reluctance we might have towards voyeurism. The most powerful influence the titles music has over the film is its various ways of presenting ostinati. We learn to decode this new musical language in stages, so that the deep ostinati heard as the dying Marion falls to the floor in the shower is distinguished from the niggling four-note repeated figure associated with Marion's decision to run away with the money. ...read more.

This alerts the audience to the possibility of danger from Russia's ethnic 'others' and to the placement of the scene in the Caucasus mountain range. Suddenly the tank is ambushed and our two soldiers are severely wounded and left unconscious and seemingly dead by their comrades and are captured by the Chechens. Finally the titles begin with an endless panorama of the mountains and dramatic orchestral music in an orientalist style. Here it is difficult to determine what constitutes the essential title sequence if one accepts Herrmann's definition. The music that accompanies the titles certainly does more to emphasise the setting and the drama of the film, but we cannot forget what has already happened. The freeze-frame on Sasha's face as he fires in connection with the ultra-popular song is so strong a device so difficult to interpret on first viewing that it dominates the opening. Moreover, whilst the opening music is hardly reused before the end of the film, there is another sequence which is crucial to the film's anti-war message: the two Russians are kept hostage, chained together, for a long period and it becomes increasingly likely that they will be killed. As they sit together, back to back, Sasha begins to sing another old WWII song in a triumphant, brave voice, something that is obviously escapist. Suddenly his voice is multiplied and the song is taken over by a huge chorus and the shot moves from the two men to the vast expanse of the mountains, so that he can be seen to become the might of the Russian army. As the song is still being bellowed out, the shot changes back to the men, and Sasha is crying frantically. The false expectation of escape in patriotism that had been set up by the song is revealed, and this makes sense of the opening song in addition. In a sense, then the titles sequence constructs a conventional colonialist Russian audience led to be wary of foreign subjects, whilst its other musical material works against this. ...read more.