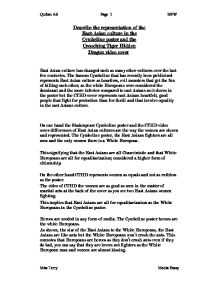 Describe the representation of the

Describe the representation of the East-Asian culture in the Cymbeline poster and the Crouching Tiger Hidden Dragon video cover East Asian culture has changed such as many other cultures over the last few centuries. The famous Cymbeline that has recently been publicized represents East Asian culture as heartless, evil monsters that get the fun of killing each other, as the white Europeans were considered the dominant and the more inferior compared to east Asians as it shows in the poster but the CTHD cover represents east Asians heartfelt, good people that fight for protection than for thrill and that involve equality in the east Asians culture. On one hand the Shakespeare Cymbeline poster and the CTHD video cover differences of East Asian cultures are the way the women are shown and represented. ...read more.

At the back the female ninja and Michelle Yeoh are fighting without any weapons and in the front Chow Yun Fat, Michelle Yeoh and Zhagi Zihi are not spilling any blood and not beheading each other. This is showing that East Asian is also as calm and peaceful as the White Europeans and can be as romantic. To conclude then we can see that the representation of East Asian culture in the poster of Cymbeline, and the CTHD video cover are very different with each other. East Asians in Cymbeline are Murderers whereas in CTHD they are calm and civilized. CTHD shows East Asian as beautiful skilled peaceful ones and are all spiritual, rather than a cruel race that was so little understood by post-war Britain. ?? ?? ?? ?? Qurban Ali Page 1 10FW Miss Terry Media Essay ...read more.