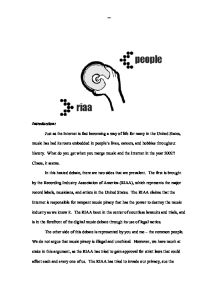 Digital music and the internet age - The people vs. the recording industry association of America.

Digital Music and the Internet Age: The People vs. the Recording Industry Association of America Introduction: Just as the Internet is fast becoming a way of life for many in the United States, music has had its roots embedded in people's lives, careers, and hobbies throughout history. What do you get when you merge music and the Internet in the year 2002? Chaos, it seems. In this heated debate, there are two sides that are prevalent. The first is brought by the Recording Industry Association of America (RIAA), which represents the major record labels, musicians, and artists in the United States. The RIAA claims that the Internet is responsible for rampant music piracy that has the power to destroy the music industry as we know it. The RIAA been in the center of countless lawsuits and trials, and is in the forefront of the digital music debate through its use of legal tactics. The other side of this debate is represented by you and me - the common people. We do not argue that music piracy is illegal and unethical. However, we have much at stake in this argument, as the RIAA has tried to gain approval for strict laws that could affect each and every one of us. The RIAA has tried to invade our privacy, sue the common people, prevent us from playing CDs in our computers, hack into our computers, stop the sale of personal music players, and change key pieces of legislature for their benefit. ...read more.

Rather than start their own legal online file-sharing program, the RIAA and the music industry were very slow in action. The RIAA did not listen to public demand for such a service. With the demise of Napster, new illegal trading programs popped up. Unlike their predecessor Napster, however, these programs would be next to impossible to shut down as they have no central server location. These networks run from user to user. Essentially, the only way to stop the programs is to shut down the Internet itself. If the RIAA had listened to the people, it is very possible that they would be in a much better position in the fight against music piracy. However, they ignored the need of the public, and dug themselves an even deeper hole. There was a very legitimate and legal answer to Napster. Rather than trying to turn the service into a paying model or creating their own service, the RIAA simply shut it down. They gave no thought to the legal uses, such as promotion, sharing of files by independent artists not signed to any record label, uncopyrighted material, and music available with permission from the artist or record company. So why didn't the RIAA and the major record labels jump to start their own Napster-like networks? The answer is simple. ...read more.

These weren't your normal ads, however. This time around, the RIAA thought that since they couldn't get your attention, perhaps popular music superstars could (Healy, par. 2). These ads, by such artists as Britney Spears, Mary J. Blige, Shakira, and Madonna have one underlying message - we are thieves. "Would you go into a CD store and steal a CD?" Britney Spears asks in one ad. "It's the same thing, people going into the computers and stealing our music" (Healy, par. 4). Rapper Nelly had a similar message. "We really look at it as stealing, because to us it's black and white, either you pay for it or you don't. And, you're not paying for it" (Healy, par. 6). However, these ads are a bit hard to swallow for the average consumer. Let's look at this picture again. These are mega-selling superstars. In 2000, Madonna had reported assets in excess of $425 million. Britney Spears makes over $40 million yearly (Healy, par. 9). The RIAA wants us to believe that these artists are hurting from piracy? I don't know about you, but I don't feel too sorry. Conclusion In conclusion, I believe that the Recording Industry Association of America is a devious and thoughtless trade group. They have continuously put their profit margin ahead of the rights of the consumers. The numerous real-life examples presented in this paper should give you a firm understanding of the unethical antics that the RIAA has used to further their cause. ...read more.