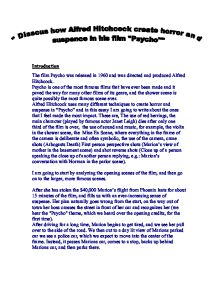 Discuss how Alfred Hitchcock creates horror and suspence in his film Psycho.

Introduction The film Psycho was released in 1960 and was directed and produced Alfred Hitchcock. Psycho is one of the most famous films that have ever been made and it paved the way for many other films of its genre, and the shower scene is quite possibly the most famous scene ever. Alfred Hitchcock uses many different techniques to create horror and suspense in "Psycho" and in this essay I am going to write about the ones that I feel made the most impact. These are, The use of red herrings, the main character (played by famous actor Janet Leigh) dies after only one third of the film is over, the use of sound and music, for example, the violin in the shower scene, the Mise En Scene, where everything in the frame of the camera is deliberate and often symbolic, the use of the camera, crane shots (Arbogasts Death) First person perspective shots (Marion's view of mother in the basement scene) and shot reverse shots (Close up of a person speaking the close up of another person replying, e.g.: Marion's conversation with Norman in the parlor scene). I am going to start by analyzing the opening scenes of the film, and then go on to the larger, more famous scenes. After she has stolen the $40,000 Marion's flight from Phoenix lasts for about 15 minutes of the film, and fills us with an ever-increasing sense of suspense. ...read more.

After Marions first scream, Hitchcock cuts to a close up shot of her mouth so that as she was being stabbed we could all see the horror and pain that she was going through. Once the assault was over and Norman/mother had left Marion slumped against the bathtub we see the last of her blood flow out of her body and down the drain as a sign of her life flowing away. The music that was played during the shower scene also played a very important part in creating horror and suspense. The screeching violin mimics the movement of the knife as "Mother" kills Marion, and after "Mother" leaves the violin strokes slow in time to the slowing of Marion's heart as she dies. In the scene where Arbogast dies, the camera at first lags behind Arbogast as he begins his climb, then jumps ahead and above him (crane shot), and then to the terrifying shot of the thin band of light that runs from the crack in the door of Mother's room, a band that quickly widens as Mother prepares to launch her assault. Once more, we never get a good look at mothers face as she is cleverly hidden in patches of light and shadow. As the door widens, we return to the shot showing Arbogast ascending the stairs. Instead of returning to show Mother coming through the door, we switch to an overhead shot. ...read more.

part of the big surprise, the chair swivels around and for the first time in the film we are confronted, face to face with the stuffed remains of Mother. Lila screams and turns around to see Norman (fully dressed up as mother charging insanely through the door, knife in hand, he is ready to attack Lila. He staggers froward, ready to strike, but at the last minute Sam lunges through the door and restrains Norman. After Norman is subdued, we get the official wrap-up from "Dr. Richmond". When the doctor is finished, a police officer enters, carrying a blanket for Norman, who is suffering from a "slight chill." we then get our final glimpse of Norman, staring helplessly, while Mother gives us her side of the story through the voiceover. She finishes by saying that she's just going to sit here like the harmless old lady she is "see, I'm not even going to swat that fly". Suddenly, the focus returns to Norman's eyes. He looks right at us and grins menacingly. The film has unmasked Norman, and to drive the point home, Hitchcock superimposes Mother's death's head grin over Norman's own. For the purpose of creating horror and suspense Psycho is perfect. The film uses a mix of techniques to create horror and suspense, ranging from the use of music, camera angles to brilliant editing and direction, added to all of this is a very good story line that sucks the viewer in and keeps him at the edge of his seat. ...read more.