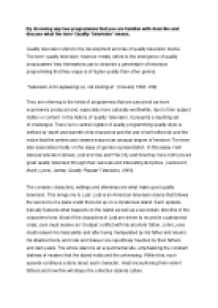 ﻿By choosing any two programmes that you are familiar with describe and discuss what the term ?Quality Television? means. Quality television refers to the development and rise of quality television drama. The term ?quality television? however mostly refers to the emergence of quality broadcasters? they themselves use to describe a genre/style of television programming that they argue is of higher quality than other genres. ?Television is for appearing on, not looking at.? (Coward, 1993: 436) They are referring to the kinds of programmes that are perceived as more expensively produced and, especially more culturally worthwhile, due to their subject matter or content. In the history of ?quality? television, it presents a daunting set of challenges. There is no central register of quality programming quality style is defined by depth and warmth of its characters and the use of self reflexivity and the notion that the writers and viewers enjoyed an unusual degree of freedom. The term also associates mostly on the issue of gender representation. In this essay I will discuss television shows, Lost and s*x and The City and how they have both proved great quality television through their success and interesting storylines. (Jancovich, Mark, Lyons, James, Quality Popular Television, 2003) ...read more.

He then runs through the jungle to a beach where he is faced with the disaster of the plane crash and people fighting for survival. Quality TV dramas are what make audiences want to keep watching and Lost is a great example of this because in the very first scene, viewers are already given that mind blowing experience and the drive to keep watching. The characters are also faced with the unraveling of the islands mystery and the motives of the unknown ?Others? who may also inhabit the island. The series tracks two major, interconnected themes; first, the struggles to survive and live together on the island and second, the lives of the fourteen main characters before the crash which is retold through flashbacks. It doesn?t follow the stereotypical television back story and allows viewers to become connected with the characters, their secrets and motivations. Jack is a doctor becomes the leader of the group; helping Charlie kicks his drug addiction and encourages ?Shannon? to pursue her relationship with ?Syid?. Jack is seen at the very beginning of the series and in the last episode in the last scene where it re creates the first scene again only in a different context. The way Lost starts off, during; with all the inconceivable and unthinkable story lines, makes it so mesmerizing for audiences. ...read more.

This quote already establishes the genre of the show and the kind of characters the audience may expect to see. Much of the criticism both positive and negative, show degrees of realism which suggests how they are entwined in the history of industry and market standards of quality television and determines gender and class. Many other dramas can be traced back to earlier ?realist? family sitcoms and still remain relevant to contemporary quality television such as s*x and The City. There is a particular emphasis on self reflectivity and the program?s representations and intersexuality. Through s*x and the City, the relation to feminism and s****l taboos positions itself in the history of television. Intersexuality occurs through the importance and real-life impact of the cultural phenomenon called ?s*x and the City?. (Akass, Kim, McCabe, Janet, Reading s*x and the city. London: I.B. Tauris, 2004) In conclusion, the serve to clearly set out the intended debate and issue of ?Quality TV?, is the way in which critics and audiences currently define it and supplying a broad overview of the critical contentiousness of quality TV as a collective term. Quality Television is about captivating storylines, unique characters and enabling viewers to want to watch excellent programming. Within this, audiences are able to connect with the show through the interesting structures that are included in them. ...read more.