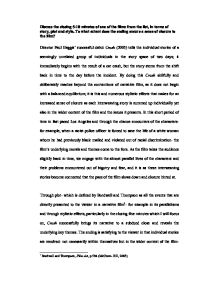 Discuss the closing 5 minute sequence of &quot;Crash&quot;. To what extent does the ending ensure a sense of closure to the film?

Discuss the closing 5-10 minutes of one of the films from the list, in terms of story, plot and style. To what extent does the ending ensure a sense of closure to the film? Director Paul Haggis' successful debut Crash (2005) tells the individual stories of a seemingly unrelated group of individuals in the story space of two days; it immediately begins with the result of a car crash, but the story stems from the shift back in time to the day before the incident. By doing this Crash skilfully and deliberately reaches beyond the conventions of narrative film, as it does not begin with a balanced equilibrium; it is this and numerous stylistic effects that makes for an increased sense of closure as each interweaving story is summed up individually yet also in the wider context of the film and the issues it presents. In this short period of time in fast paced Los Angeles and through the chance encounters of the characters- for example, when a r****t police officer is forced to save the life of a white woman whom he had previously black mailed and violated out of racial discrimination- the film's underlying morals and themes come to the fore. As the film takes the audience slightly back in time, we engage with the almost parallel lives of the characters and their problems encountered out of bigotry and fear, and it is as these interweaving stories become connected that the pace of the film slows down and closure hinted at. ...read more.

A balanced, almost symmetrical frame follows as the camera cuts to a medium close up of Officer Tom Hansen now in the middle of it. As the camera remains static however he walks slowly forward and to the right of the frame; this allows the balance to be disrupted, thus subtly emphasises his vulnerability in the frame.2 This relates to his weakness in the story, as his position in the frame becomes vulnerable at a time in the story when his previous position of power and success has been substituted for a position of regret, reflection and shame. By showing his character in this way, the tone of the scene is extremely toned-down and as the story allows for the characters' reflection, so the mood and mise-en-scene allows for audience reflection of racial prejudice. As the Officer walks forward in a few more frames of the shot, it is also noteworthy to point out the objective camera angle. By employing this camera angle the audience happens to look in as opposed to involving themselves in the action. This distances the audience somewhat and forces them to empathise with this character. Lighting works together to connote sadness; the predominant darkness and orange filter used suggests that all the light comes from the background fire, thus selectively lighting parts of the character's face and not much else. This slightly dappled light falling onto the character's face remains even throughout this shot and so slight changes in his harrowing expression of emotion are easily registered by the viewer; this again serves to emphasize his emotional state over actions or setting. ...read more.

As the various drivers are left on the road fighting with each other, the camera slowly pans out of the action, leaving a birds- eye shot angle looking down on it. This remarkable angle combined with lively yet reflective music- as it reads these little black clouds keep walking round me- humorously presents the audience with a finality to the story, yet keeps the actual issues unresolved. It realistically produces closure to the plot and story, as it has successfully addressed various issues so that they are understood by the audience; yet it is presented as an ongoing problem- as the narrative goes full-circle- thus leaving the audience with room for reflection themselves. By looking at the closing five minutes of Crash, through style and plot the story and essential issues of post 9/11 America are presented unflinchingly to the audience. To reveal the wider issues in the story, Crash has effectively depicted the every day life of a diverse group of characters, who as it turns out have more in common with each other than they initially thought. By the interaction of mainly sound and editing with the plot, Paul Haggis' story is told with force, allowing the audience to contemplate and reflect on various issues- namely racial prejudice in the world today- along with the narrative characters. 1 Bordwell and Thompson, Film Art, p.504 (McGraw- Hill, 2005) 2 Bordwell and Thompson, Film Art, p.142 (McGraw-Hill, 2005) ?? ?? ?? ?? ...read more.