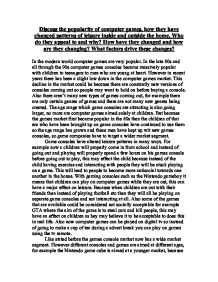 Discuss the popularity of computer games,how they have changed patterns of leisure inside and outside the home - Who do they appeal to and why? How have they changed and how are they changing? What factors drive these changes?

Discuss the popularity of computer games, how they have changed patterns of leisure inside and outside the home. Who do they appeal to and why? How have they changed and how are they changing? What factors drive these changes? In the modern world computer games are very popular. In the late 80s and all through the 90s computer games consoles became massively popular with children to teenagers to men who are young at heart. However in recent years there has been a slight low down in the computer games market. This decline in the market could be because there are constantly new versions of consoles coming out so people may want to hold on before buying a console. ...read more.

For example now a children will properly come in from school and instead of going out and playing will properly spend a few hours on his games console before going out to play, this may effect the child because instead of the child having exercise and interacting with people they will be stuck playing on a game. This will lead to people to become more antisocial towards one another in the house. With gaming consoles such as the Nintendo gameboy it means that children can play on computer games while they are out, this can have a major effect on leisure. Because when children are out with their friends then instead of playing football etc then they will all be playing on separate game consoles and not interacting at all. ...read more.

Whereas the x-box is aimed at the more mature end of the market where people are into more advanced games, it also has a more grown up feel to it. Game consoles and the games for them have gone through a phenomenal change from when they first brought out. I believe the first computer game that was in public use was a very basic tennis game with 2d graphics. However now you can get a very wide range of different gameplays. These changes has occurred because of the advances in technology and because of the needs of the game player have become greater and greater, some class it as a type of drug where addicts need more and more games to feed their habits. ...read more.