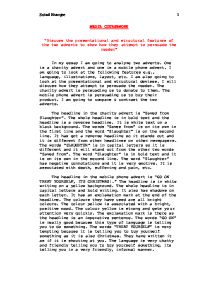 &quot;Discuss the presentational and structural features of the two adverts to show how they attempt to persuade the reader&quot;

MEDIA COURSEWORK "Discuss the presentational and structural features of the two adverts to show how they attempt to persuade the reader" In my essay I am going to analyze two adverts. One is a charity advert and one is a mobile phone advert. I am going to look at the following features e.g., language, illustrations, layout, etc. I am also going to look at the presentational and structural devises. I will discuss how they attempt to persuade the reader. The charity advert is persuading us to donate to them. The mobile phone advert is persuading us to buy their product. I am going to compare & contrast the two adverts. The headline in the charity advert is "Saved from Slaughter". The whole headline is in bold text and the headline is a reverse headline. It is white text on a black background. The words "Saves from" is on its own in the first line and the word "Slaughter" is on the second line. It has got a reverse headline so it stands out and it is different from other headlines on other newspapers. The words "SLAUGHTER" is in capital letters so it is different and it will stand out from the other two words "Saved from". ...read more.

It also looks lonely and sad. The background is very plain, it has bricks and it is standing on hay. She has got her head down suggesting it is depressed and cannot relax. The illustration is at the top of the page because it is important and that is where our eyes are drawn after the headline. The donkey is shown against a brick wall as the brick wall is dull and that the donkey lives in a very dull environment. The mobile phone advert has two types of illustrations. Firstly there are two mobile phones and secondly there is a table comparing the offers & prices. The two mobile phones are different. One is a black phone and one is a silver phone. The black phone has "actual size" written underneath it so we know what the exact size is and the silver phone is about half the size of the black phone, the silver phone is not the actual size. The silver phone is in silver not because they want to use colour but because it actually is silver and we know what colour it is and we know what we are getting. They have used a table because it is better than reading a whole load of information. ...read more.