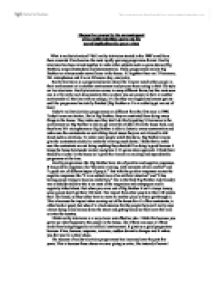 Discuss the reasons for the success/appeal of the reality television genre and the moral implications the genre raises.

Also "I'm a celebrity get me out of here" they go from a luxury, cool lifestyle to living in a damp, moist jungle. We like to see this on the television because it is humorous when a person in an excellent lifestyle moves to their worst nightmare. We like watching people suffer and crack at a game show they signed up to be in. It makes them regret what they have done and the viewers get to watch them suffer for their mistakes on the show. This genre of programmes is really aimed at teenagers to adults. I think it is aimed at these ages because it gives the viewers good television, it makes us stop and think about our own life and see our life in a different way. It shows us what not to do in those kinds of situations, and what to do. It makes us more proud of our selves and confident because bad things are not always being said about us and we are not plastered over the front of magazines and newspapers, and we are not always being watched by people. We also get dramatic viewing at the same time from watching these programmes, we see people fighting, arguing, falling out and being upset and miserable. ...read more.

They edit the eviction night from one hour into around about five minutes worth of information; they show what the people want to know and need to know so it will make the people tune in for the proper eviction later. In a five minute scene it shows the housemate who is going to leave rushing to get ready to leave the house, choosing their clothes, saying goodbye to their fellow housemates and getting their household items together ready to leave. I think this format of programme has a very big future ahead of its self. I think this because there are a lot of new things which can be added to these shows. In Big Brother they can keep on adding new and better tasks into the house. They could reward the contestants more; give them more alcohol to make the environment in the house better for the viewers. When they have alcohol in the house it makes the viewing better because people say stuff which they don't mean and they do stuff they don't mean to do, so it spices up the viewing giving viewers much better viewing. The only thing that could stop programmes like Big Brother from being so big in the future would be if they get really boring people to come into the house, because this would ruin the programme because they would be no conflicts and no fun. ...read more.