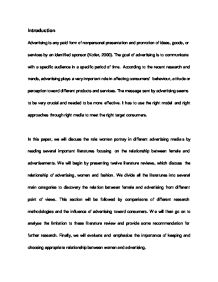 Introduction Advertising is any paid form of nonpersonal presentation and promotion of ideas, goods, or services by an identified sponsor (Kotler, 2000). The goal of advertising is to communicate with a specific audience in a specific period of time. According to the recent research and trends, advertising plays a very important role in affecting consumers' behaviour, attitude or perception toward different products and services. The message sent by advertising seems to be very crucial and needed to be more effective. It has to use the right model and right approaches through right media to meet the right target consumers. In this paper, we will discuss the role women portray in different advertising medias by reading several important literatures focusing on the relationship between female and advertisements. We will begin by presenting twelve literature reviews, which discuss the relationship of advertising, women and fashion. We divide all the literatures into several main categories to discovery the relation between female and advertising from different point of views. This section will be followed by comparisons of different research methodologies and the influence of advertising toward consumers. We will then go on to analyse the limitation to these literature review and provide some recommendation for further research. Finally, we will evaluate and emphasize the importance of keeping and choosing appropriate relationship between women and advertising. Literature Review Concept of the influenced body image of advertising No matter the television advertising, programming or print advertising, these kinds of commercials with fashion, slim and appealing models will more or less influence the targeted market-young women. As mentioned by Biocca and Myers (1992), the television advertising and programming affect a young women's perception of her own body. And watching even 30 minutes worth of television programming and advertising can alter a women's perception of the shape of her body. Because advertising most often represents some ideal future self to the viewer in the process of selling a product that will aid the individual in attaining this ideal future self. ...read more.

According to the content analysis made by Courtnry and Lockeretz (1971), they demonstrated that women were generally portrayed in print ads in accordance with four primary stereotypes. Women were depicted primarily as s****l objects, belonging in the home, dependent on men and seldom shown making important decisions or doing important things. Women would have different point of views toward these stereotypes because of education, social status (Lundstrom and Sciglimpaglia, 1977) and self-perception. Those women with more education, higher social status and leadership positions are most likely to be critical of female role portrayals in advertising. A women with central feminist self-schema then, should be more likely than a woman without such a self-schema or with a less central such self-schema, to notice, react to and discuss stereotypical role portrayals in advertisements. Awareness of stereotypical role portrayals and perception of them varies by individual, depending upon internal structures of self that reflect important values with respect to gender and feminism. Women with central self-schema on gender and feminism will be more aware and critical of such portrayals. These schemas represent the way the self has been differentiated and articulated in memory in particular domains (Markus. 1977). Advertising and self-perception of female Many women began to perceive alternatives to the traditional role including choices to pursue non-traditional careers and nontraditional relationships. Understanding women's changing roles is essential for developing successful positioning strategies aimed at appealing to the women's market (Debevec and Iyer, 1986). Individuals differ on the extent to which they adhere to these idealized standards of masculinity and femininity with s*x-typed individuals adhering more strongly to the traditional standards. High masculine/ low feminine group had a higher purchase intent for modern positionings than for traditional positionings. Women will have different preference about advertising based on their s*x-role identity. To look into more detailed about self-schema, the advertising or advertising model will affect pre-adolescents and adolescents' perception from three different motives: self-evaluation, self-improvement and self-enhancement by using social comparison theory (Martin and Gentry, 1997). ...read more.

Conclusion To sum up, people view beauty and women body image from different perspective and have their own criteria to judge what the beauty is based on their cultural background, past experience, education and ways of thinking. Advertising including television, print or other forms of advertisements will influence the target consumers' behaviour, perception and attitude. In order to attract the real target customers, advertisers have to choose the right model to match their products' image. From the twelve literature reviews, we found that advertising really plays a very important role when appealing or attracting consumers' attention. When doing further research in this field, we need to take a broader view to analyse the influence of adverting toward different kinds of consumers. Reference: Basil G. Englis, Michael R. Solomon, and Richard D. Ashmore (1994) 'Beauty Before the Eyes of Beholders: The Cultural Encoding of Beauty Types in Magazine Advertising and Music Television', Journal of Advertising, XXIII, June, 49-64. Benny Barak and Barbara Stern (1986) 'Women's Age in Advertising: An Examination of Two Consumer Age Profiles'. Journal of Advertising Research; Dec85/Jan86, Vol. 25 Issue 6, p38, 10p Frestinger, Leon (1954), 'A Theory of Social Comparison Processes', Human Relations, 7, 117-140 Lynn J. Jaffe (1991), 'Impact of Positioning and s*x-role Identity on Women's Response to Advertising'. Journal of Advertising Research; Jun/Jul91, Vol. 31 Issue 3, p57, 8p, 3 charts, 1bw Marsha L. Richins (1991) 'Social Comparison and The Idealized Images of Advertising', Journal of Consumer Research, 18 JUN, 71-83. Mary C. Martin and Patricia F. Kennedy (1993) 'Advertising and Social Comparison: Consequences for Female Preadolescents and Adolescents', Psychology and Marketing, 10(6), 513-529. Mary C. Martin and Patricia F. Kennedy (1994), 'Social Comparison and The Beauty of Advertising Models: The Role of Motives for Comparison', Advances in Consumer Research, 21, 365-371. M.C. Martin and N.J. Gentry. (1997), "Stuck in The Model Trap: The Effects of Beautiful Models in Ads on Female Pre-adolescents and Adolescents", Journal of Advertising 26 (2) Summer :19-33. Michael R. Solomon, Richard D. Ashmore and Laura C. ...read more.