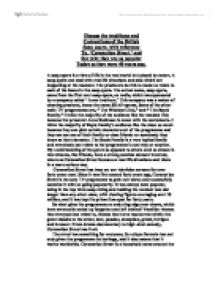 Discuss the traditions and Conventions of the British Soap opera, with reference To, 'Coronation Street,' and Say why they are as popular Today as they were 40 years ago.

Discuss the traditions and Conventions of the British Soap opera, with reference To, 'Coronation Street,' and Say why they are as popular Today as they were 40 years ago. A soap opera is a view of life in the real world but played by actors. A soap opera can deal with real life situations and also which are happening at the moment. The producers do this to make us relate to each of the issues in the soap opera. The actual name, soap opera, came from the first ever soap opera, on radio, which was sponsored by a company called ' Lever brothers.' This company was a maker of cleaning products, hence the name SOAP operas. Some of the other main TV programmes are, " The Weakest Link," and " The Royle Family." I think the majority of the audience like the weakest link because the presenter Anne Robinson is mean with the contestants. I think the majority of Royle Family's audience like the show so much because they can pick certain characters out of the programme and they can see one of their family or close friends or somebody they know as that character. ...read more.

In coronation street I think the young couple would be Tyrone and Maria and the older couple would be Maxine and Ashley. In Eastenders the young couple would be Sonia Jackson and Jamie Mitchell and the older couple would be Pat and Roy Evans. Another stereotype would be the strong woman. She is normally independent, experienced and self-confident. In Eastenders this would be Peggy Mitchell and in Coronation Street this would be Rita Sullivan. There is also the awkward oldie and the troubled teenager. The awkward oldie has an opinion and something to say about everything. The troubled teenager, the audience tends to like to watch them grow up. In coronation street the awkward oldie would be Blanche and Norris. In Eastenders Dot Cotton would take this role. In coronation street the troubled teenager would be Sarah-Lou and in Eastenders it would be Sonia Jackson. I think this because they have both have just had babies and are both having problems with there love lives. Every soap uses lots of different camera shots and angles. First of all there is the reverse shot, this is used when two people are talking, tends to be head and shoulders shot. ...read more.

This phrase is dramatically incorrect. In the 1940's films they used strong, sharp, clip Standard English. The queen, how she speaks now was old Standard English. Zo� Ball says, "Rilly Gid" instead of, "Really Good." This is Received Pronunciation and this is starting to filter up throughout the country. Despite soap operas being popular because it is centred on women, there is some evidence to show more, that soaps are focussing more frequently on storylines outside the domestic plots such as crime. Additionally the storylines have recently focused on male characters as in Eastenders, Ian Beale fought to get his children back and in Coronation Street Jim McDonald had to face the consequences when his son got in a lot of trouble with drug dealer, Jed Quigley. Finally, other possible reasons for soap operas popularity could be escapism or relaxation. At the end of the day the viewer can sit down, relax and watch an episode of Coronation Street, and escape from the problems of reality, and think about characters problems instead. Most significantly though, soap operas concern with the everyday people and their problems, big and small, appears to be one of the main reasons why this genre is so popular. By Kiera Brown ...read more.