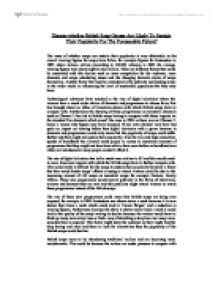 Discuss whether British Soap Operas Are Likely To Sustain Their Popularity For The Foreseeable Future?

Discuss whether British Soap Operas Are Likely To Sustain Their Popularity For The Foreseeable Future? The issue of whether soaps can sustain their popularity is very debateable as the overall viewing figures for soaps have fallen, for example figures for Eastenders in 1995 where sixteen million (according to BARB) whereas in 2005 the average viewing figures were about eight to nine million. There are different factors that could be associated with this decline such as more competition for the audience, more channels and soaps, scheduling issues and the changing dramatic styles of soaps themselves. Another factor that must be considered is the publicity surrounding soaps in the wider media as influencing the level of sustainable popularity that they may have. Technological advances have resulted in the rise of digital television where the viewers have a much wider choice of channels and programmes to choose from, this has brought about an influx of American shows with which British soaps have to compete with. ...read more.

This would make it difficult for the soaps to sustain their popularity however a factor that that would hinder soaps' efforts in trying to attract viewers could be due to the increasing amount of UK soaps on terrestrial soaps for example Doctors, Family Affairs. These new programmes would receive publicity in the forms of interviews, reviews and because they are new and this publicity might attract viewers to watch these programmes instead of the British soaps. The rise of these new programmes could mean that British soaps are being over exposed, for example in 1995 Eastenders was shown twice a week however it is now shown four times a week which could lead to 'viewer fatigue' and a reduction in viewing figures. Furthermore because the show is shown more times a week it could lead to the quality of the script writing to decline because the writers would have to think up many more story lines or find a way of stretching a storyline over many more episodes than is required. ...read more.

viewers, however this publicity could discourage people to watch the soaps because the know what is going to happen, due to story lines being leaked to tabloids and TV guides. On the other hand if the storylines were not leaked then viewers would not know about the 'big' episodes and it's probable that fourteen million people wouldn't have watched Den's demise because they would not have known about it. Thus it could be said that publicity has quite a big role if soaps are to sustain their popularity. Even though viewing figures as a whole have dropped soaps still top the viewing figures, thus it could be said that soaps have in fact not lost their popularity and have sustained their popularity but it is television that has lost its popularity. This could mean that audiences could eventually diminish as less and less people are watching television. On the other hand it could just mean that television is more boring and we will see soaps becoming more melodramatic. ...read more.