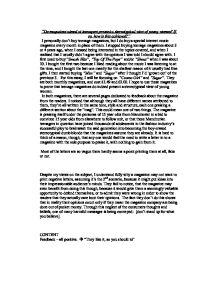 &quot;Do magazines aimed at teenagers present a stereotypical view of young women? If so, how is this achieved?&quot;

"Do magazines aimed at teenagers present a stereotypical view of young women? If so, how is this achieved?" I personally don't buy teenage magazines, but I do buy a special interest music magazine every month in place of them. I stopped buying teenage magazines about 3 or 4 years ago, when I ceased being interested in the topics covered, and when I realised that I usually didn't agree with the opinions I was told I should agree with. I first used to buy "Smash Hits", "Top Of The Pops" and/or "Shout" when I was about 10. I bought the first two because I liked reading about the music I was listening to at the time, and I bought the last one mainly for the shallow reason of it usually had free gifts. I then started buying "Mizz" and "Sugar" after I thought I'd 'grown out' of the previous 3. ...read more.

to defend themselves, or to admit they were wrong in order to show the readers that they actually care bout their opinions. The fact they don't do this shows that in reality their opinions count only if they mean the magazine company are being done out of pocket money. Through this neglect of the consumers thoughts and beliefs, one of many harmful messages is being conveyed: [don't stand up for what you believe] CONTENT Feedback - all positive. ==> "They like it, so you should to" Think we're only interested in trends and boys: Sugar, pg 72. "Wear Pink to make the boys wink" "Look super-trendy..." "you'll never be late for that date with these trendy watches" "impress your mates with..." Quizzes ==> 'everyone falls into one of three categories' no "outcasts". Sounds like the magazine understands you/can relate encourages you to change opinions to fit in. Pictures of celebrities looking bad (Cosmo pg. ...read more.

Yikes!" (Cosmo pg. 14) "Janet's clearly gone the way of her wacko brother". Cosmo pg. 128 "Dogs Dinner is never a good look" - makes teenager feel the need to be accepted or fit into the mould of the people the magazines praise. (same pages) Use 4th person. "We like..." sense of community. Like a 'club'. Patronising. To make you feel like you belong. Both magazines seem to dedicate a large percentage of the articles to real life stories, including headings such as "Abuse Made Me Cut Myself" and "I Lost My Dad in America's Twin Towers Tragedy". To me, this almost seems like the magazines are trying to promote a 'At least that didn't happen to me' idea. This can be positive, as it could make teenagers feel more grateful for what they have, but They stereotype by using such words as "Teen queen. Princess etc." This can be quite downgrading for some of the lesser attractive women and might lead on to disorders such as anorexia They use simple words. This could be due to the fact that many women are stereotyped to be quite un-intelligent ...read more.