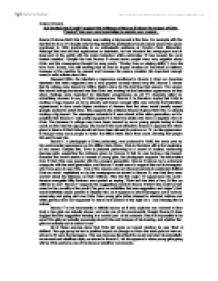 Do Sources E and F support the evidence of Source B about the impact of Elvis Presley? Use your own knowledge to explain your answer.

Q.3 Do Sources E and F support the evidence of Source B about the impact of Elvis Presley? Use your own knowledge to explain your answer. Source B shows that Elvis Presley was making a big impact at the time. For example with the fact that he is on TV despite only having started his professional music career around two years previously in 1954 (performing to an enthusiastic audience at Overton Park, Memphis). Although this was his first appearance on television, he has shocked the newspapers and at least part of the public with his crude behaviour while performing: "It has caused the most heated reaction." Despite the fact Source B shows some people were very negative about Elvis, and the newspapers thought he sung poorly: "Presley has no singing ability" (from the New York Times), it is still showing that he had an impact whether he was liked or disliked, because of the reaction he caused and because the papers consider him important enough news to write articles about him. ...read more.

The increase in ratings may have been caused by more young people tuning in than usual, as this was the age group who found Elvis most attractive. Source E opposes the views given in Source B that Elvis should not have been allowed to perform on TV, as his appearance in fact got many more people to watch the Milton Berle Show than usual, showing that people did want to see him. Source F, a photograph of Elvis performing, was produced in 1956, the same year as his controversial appearance on the Milton Berle Show. Elvis is therefore still at the beginning of his career. Despite this, Elvis is pictured performing to a crowd of excited, screaming teenage girls, supporting the evidence given by Source B that he was having a big impact. Because the crowd seems to consist of young girls, the photograph supports the information from B that Elvis was popular with the younger generation. ...read more.

Nice young girls (often dressed in starched cottons and white gloves) were not 'supposed' to heave and scream at the sight of a man dancing like an animal. Source F is not necessarily a reliable source as it only captures one moment in time (only a few girls are actually shown, and only one of his movements), though Source B does suggest that the suggestive dancing is a normal part of his concerts. Also it is impossible to be sure if the girls are actually screaming about Elvis and because of his dancing, and whether the girls are actually out of control or not. All of these sources show that Elvis did make an impact whether he was liked or disliked. The age group he had a positive impact on (though not from the adult point of view as shown in B) were the teenagers. This was because they liked his music and also his animalistic movement and rebellious style, as shown in Source F, which appears to show young girls going wild as Elvis performs one of his famous 'primitive' movements. Alistair Divorty ...read more.