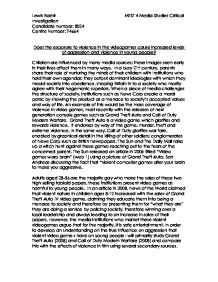 Does the exposure to violence in the videogames cause increased levels of aggression and violence in young people? Children are influenced by many media sources; these images seen early in their lives affect them in many ways. In a busy 21st century, parents share their role of nurturing the minds of their children with Institutions who hold their own agendas; they output dominant ideologies with which they mould society into obedience, shaping Britain in to a society who mostly agree with their hegemonic superiors. When a piece of media challenges the structure of society, institutions such as News Corp create a moral panic by showing the product as a menace to society's accepted values and way of life. An example of this would be the mass coverage of violence in video games, most recently with the releases of next generation console games such as Grand Theft Auto and Call of Duty Modern Warfare. Grand Theft Auto is a video game which glorifies and rewards violence. It endorses by way of the game, murder, theft and extreme violence, In the same way, Call of Duty glorifies war fare, enabled by graphical detail in the killing of other soldiers; conglomerates of News Corp such as British newspapers, The Sun and The Daily Mail raise up a witch hunt against these games reaching out to the fears of the concerned parent. The Sun released an article in 2006 titled "Video games warp brain" (web 1) ...read more.

The non diegetic sound can change the mood of the visuals; in Call of Duty 4 there is a scene in which the protagonist (whose eyes you are viewing the events through) is tortured by terrorists burning lighted cigarettes on your lifeless body as they beat you up to near unconsciousness the sound can suggest pain and agony because. Even when you play as the character killing other men, the non diegetic sound makes you as the player feel sympathy for the death of another man; however when looking at Grand Theft Auto IV, the game uses non diegetic sound to connote justification and triumph. The way some may interpret this is that violence is acceptable. Certainly the Camera angles such as a low camera shot in GTA IV which gives a view of the character as powerful and dominant with his weapon gives the audience a glamorization of violence. Sympathy can be generated for a character if the camera takes the POV of the character. Again using the example of Call of Duty 4, the question can be asked, which end of the barrel of the gun are the audience looking down? The audience identifies with the perpetrator of the violence. Realism in a game changes the emotion we feel and how we identify with the characters, in the example of "Call of Duty 4", we see total and graphic realism of a war, however it is edited and uses sound effects. ...read more.

In over the top fashion characters are mutilated often with fatal consequences, however the character makes a full recovery in the next scene. We can compare this harmless "slapstick" comedy of the past with an ultra realistic and graphic depiction of death that young people are exposed to in Grand Theft Auto and other similar games. Children have always been exposed to violence, yet the interactivity of the violence today makes them feel part of the violence and thus making them more involved. Videogames give young people a form of escapism into a life that is different than the one they live. The reality that they construct allows them to perform things deemed unacceptable or simply unachievable in everyday life. However, this causes desensitization to right and wrong, giving them a warped view of morality. Violent videogames influence violent behavior in easily led and easily manipulated young minds. Although games that promote violence and crime are censored by the British classification board (BBFC) and PEGI, these censors can be easily evaded and young people can gain access to harmful pieces of media. Violence video games like Grand Theft Auto and Call of Duty promote and in some cases glorify violent actions, until further regulation is put into practice on these games; young people will play these games without the moral thought not to put into practice the violent deeds played out in the videogame. ...read more.