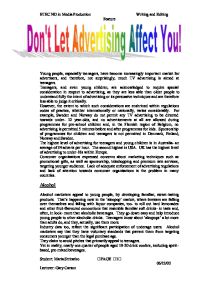 Young people, especially teenagers, have become increasingly important market for advertisers, and therefore, not surprisingly, much TV advertising is aimed at teenagers. Teenagers, and even young children, are acknowledged to require special consideration in respect to advertising, as they are less able than older people to understand fully the intent of advertising or its persuasive techniques and are therefore less able to judge it critically. However, the extent to which such considerations are enshrined within regulations codes of practice, whether internationally or nationally, varies considerably. For example, Sweden and Norway do not permit any TV advertising to be directed towards under- 12 year-olds, and no advertisements at all are allowed during programmes for pre-school children and, in the Flemish region of Belgium, no advertising is permitted 5 minutes before and after programmes for kids. Sponsorship of programmes for children and teenagers is not permitted in Denmark, Finland, Norway and Sweden. The highest level of advertising for teenagers and young children is in Australia- an average of 34 adverts per hour. The second highest is USA. UK has the highest level of advertising to under-18s within Europe. Consumer organizations expressed concerns about marketing techniques such as promotional gifts, as well as sponsorship, teleshopping and premium rate services, targeting younger audience. Lack of adequate enforcement of advertising regulations and lack of attention towards consumer organisations is the problem in many countries. ...read more.

Aside from teenagers and young adults, alcohol advertising can appeal to very young children. For instance, the Budweiser frog campaign, introduced in 1995, is highly recognisable among young children. In just over a year, children's familiarity with frogs' "Bud-weis-er" slogan nearly equalled their recognition of Bugs Bunny's signature greeting "What's up, Doc?" In 1996 children named Budweiser beer commercials amongst their favourite advertisements. Although recognition disparity between Budweiser frogs and Saturday morning characters may come as a surprise, most children watch TV during the hours of 7 and 8 pm, illustrating how easily alcohol advertising reaches underage TV audience. Tobacco Similar to alcohol advertising, cigarette advertisements tend to appeal to teenagers and young adults, not excluding children, by emphasizing youthful vigour, s****l attraction and independence. A 1992 Gallup poll reported that 74% of the public believe that tobacco advertising and promotions are meant to encourage children to smoke. In fact, studies show that young people may be more influenced by advertising than older consumers, and that tobacco advertisements and promotions are the most persuasive influences on children and teenagers to start smoking, surpassing peer pressure. In 1994 the Surgeon General's report concluded that cigarette advertising appeared to increase young people's risk of smoking. Also, recently released documents from R.J. Reynolds's tobacco company establish that the company intended to direct their advertising towards children as young as 14. ...read more.

In most participating countries there are few or no specific rules concerning food advertising to teenagers and young children beyond the rules that must apply to all advertising. Also, American studies prove that children influence on estimated 72% of family food and beverage purchases. Children aged 7-12 spend approximately �2.3 billion of their own money on snacks each year, while teenagers spend �1.3 billion at fast food restaurants alone. The UK food industry spends �36 billion a year on advertising, making it one of the largest advertisers in the UK economy. The two things t hat are sold to children and teenagers most on TV are toys and food, and 98% of food advertising is for products they don't have to eat, non-nutritive things. Food marketers also use cartoon and movie characters to attract children to their product. Food advertisements, particularly those to young children, should pay regard to considerations of oral health. They should not encourage frequent consumption throughout the day of products liable to cause tooth decay, such as acidic drinks, and those containing sugar, or associate products with situations such as bed- time. Confectionary adverts must illustrate a toothbrush logo, to remind children to brush their teeth. BTEC ND in Media Production Writing and Editing Feature PAGE PAGE 1 Student: Maria Strinatko 06/12/02 Lecturer: Gary Carson ...read more.