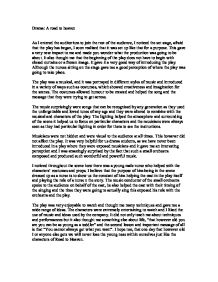 Drama: A road to heaven

Drama: A road to heaven As I entered the auditorium to join the rest of the audience, I noticed the set stage, afraid that the play has began, I soon realised that it was set up like that for a purpose. This gave a very new impact to me and made you wonder what the production was going to be about. It also thought me that the beginning of the play does not have to begin with closed curtains or a frozen image. It gave it a very good way of introducing the play. Although the nurses sitting on the stage gave me a good perception of where the play was going to take place. ...read more.

The lighting helped the atmosphere and surrounding of the scene it helped us to focus on particular characters and the musicians were always seen as they had particular lighting in order for them to see the instructions. Musicians were not hidden and were visual to the audience at all times. This however did not affect the play. It was very helpful for us drama students, as we have never been introduced in a play where they were exposed musicians and it gave me an interesting perception and I was amazingly surprised by the fact that such a small orchestra composed and produced such wonderful and powerful music. I noticed throughout the scene how there was a young male nurse who helped with the characters' costumes and props. ...read more.

The play was very enjoyable to watch and thought me many techniques and gave me a wide range of ideas. The characters were extremely entertaining to watch and I liked the use of music and ideas used by the company. It did not only teach me about techniques and performances but it also thought me something else about life, "that however old you are you can be as young as a toddler" and the second lesson and important message of all is that "You cannot always get what you want". I hope too, that one day that however old I or anyone else gets we will never lose the young ness within ourselves just like the characters of Road to Heaven. ...read more.