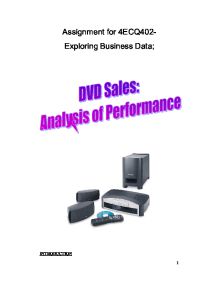 Assignment for 4ECQ402- Exploring Business Data; INTRODUCTION DVD Sales is a company selling DVD players inside the UK. It is a large company with many shops all around the country. The locations of its shops can be divided into three regions of the UK (North, South, East). The company has been selling three different types of DVD players & has been launching advertising campaigns for each of the types in the year 2002. The aim of this part of the report (task 1) is to assess the performance of sales for the three different types of DVD players and analyse the affects of other factors that might have affected the sales. The performance of the company has been stored as a data in the PC and these data's will be the source of information for this report. 'Minitab' application system will be used to generate findings and calculations. The relevant source of information used in this report will be; * Regional Location of the individual outlets (North, South, East), * Gender of manager in individual shops, * The age of the manager in the individual shops, * Price increase of the products in individual outlets from the year 2000, * Average monthly advertising expenditure of individual outlet, * Average annual sales of individual outlet for individual products, * Total DVD player sales for individual outlet (Annually). ...read more.

This is a very important factor for the company, there is a much larger returns in terms of sales for the relatively small budget spent on advertising. This could indicate that the public will not be fully average of the products sold by the company if there is little advertisement, or the advertising strategy of the company is very affective. vi. Affect of Price Increases on Total Sales Regression Analysis: Total sales versus Price Increases The regression equation is: Total sales = 808.872 - 79.6935 Price Increases S = 54.4438 R-Sq = 63.8 % R-Sq(adj) = 63.4 % Analysis of Variance Source DF SS MS F P Regression 1 484826 484826 163.565 0.000 Error 93 275663 2964 Total 94 760489 The graph clearly indicates that the more you increase the price of the players the less sales you will make (there is a negative linear relationship between the two variables). The R-Sq value is 63.8%, meaning that 63.8% of the total sales ca be explained by looking at the price increases, this indicates that the influence that one variable has on the other is very high. The reason for this high relationship between the two variables could be because of fierce competition from other firms, therefore a little increase in price could make DVD sales a lot less competitive, resulting in the loss of the customers. ...read more.

From the graph we can clearly see that the sales in all four of the goods have risen significantly in four years. But the sales in DVD players have risen the most compared to others. If we look carefully at the data in sales of DVD players we can see that the market for DVD products were non-existent in 1998/9. This shows that DVD products have been very successful from the day it was launched. "Sales of DVD Videos were four times higher in 2000 (16.6 million) than in 1999 (4.05 million) according to figures released in January 2001 by the British Video Association (BVA)...The British public is embracing DVD Video like no other entertainment format before. DVD Video players continue to be the fastest selling consumer electronics format launch of all-time." Quote from: www.templatebusiness.com/marketing/surveys/ SGS%20e-commerce%20100%20-%20Video-DVD.pdf Sales in DVD Movies United Kingdom Percentages Comedy 32 Action/adventure 20 Thriller 19 Drama 13 Horror 6 Children's/family 6 Science fiction 4 Source of table: http://www.statistics.gov.uk/StatBase/Expodata/Spreadsheets/D7186.xls The main purpose that the consumers buy DVD players is to watch movies. If we look at the table we can see that the most popular type of movies brought for the DVD players is Comedy in 32% and the least in Science Fiction at 4%. Comedy is far the most popular movies type. The graph below was formed using Microsoft EXEL; 1 ...read more.