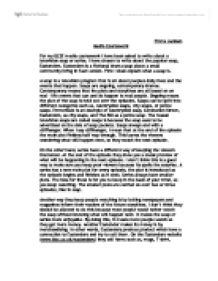 Emma Jackson Media Coursework For my GCSE media coursework I have been asked to write about a television soap or series. I have chosen to write about the popular soap, Eastenders. Eastenders is a fictional drama soap about a small community living in East London. First I shall explain what a soap is. A soap is a television program that is all about peoples daily lives and the events that happen. Soaps are ongoing, contemporary dramas. Contemporary means that the plots and storylines are all based on on real - life events that can and do happen to real people. Ongoing means the plot of the soap is held out over the episodes. Soaps can be split into different categories such as, countryside soaps, city soaps, or police soaps. Emmerdale is an example of countryside soap, Coronation Street, Eastenders, as city soaps, and The Bill as a police soap. The reason television soaps are called soaps is because the soap used to be advertised on the side of soap packets. Soaps always end with a cliffhanger. When I say cliffhanger, I mean that at the end of the episode the main plot finishes half way through. This leaves the viewers wondering what will happen next, so they watch the next episode. On the other hand, series have a different way of keeping the viewers interested. At the end of the episode they show you a sneak preview of what will be happening in the next episode. ...read more.

I timed an episode of Eastenders. The viewing time was 27:06:92 minutes and the credits were 00:31:38 seconds, which together, give a total o 27:38:25 minutes. This is slightly over the target length for Eastenders, which is 27 minutes and 15 seconds. The maximum is 27:40:00 minutes. I also timed an episode of another popular soap, Coronation Street. I found out that Eastenders is on our screens for about 1 minute and 30 seconds longer than Coronation Street. The reason for this may be that, Coronation Street has a commercial break, which Eastenders doesn't have. A plot is the main storyline of the program. It usually involves two or more of the characters. Currently, the main plot of Eastenders includes Phil Mitchell, Peggy Mitchell, Sonja Jackson, Jamie Mitchell, Lisa Fowler and her and Phil's baby, Louise. In a recent episode, Lisa took her baby and fled to Portugal. Phil wasn't happy about this; after all she had taken his child. Phil followed her to find his daughter. In the last episode, Phil pulled up in a taxi and climbed out with Louise. The viewers were then expecting Lisa to get out, but then the taxi pulled away. Phil had returned. Without Lisa. People were very suspicious and refused to believe when Phil lied to them saying that he and Lisa had came to an agreement. He said Lisa was suicidal and they had agreed it was best for Phil to take the baby. ...read more.

He cries a lot, I must have seen him cry about 5 times, usually to do with his children. Ian is a character I definitely wouldn't like to be, because he has a hard life. However, the character I would love to be is Janine Butcher. The actress Charlie Brooks has the task of being Janine Butcher. Charlie's date of birth is 3rd May 1981 and is originally from Barmouth, North Wales. Her first appearance in the soap was on 22nd June 1989 when she was only eight years of age. She was the third actress to play Janine Butcher. Janine is a fairly pleasant character although she is awful to the people she dislikes. I think she is greatly misunderstood. She likes to get her own way, and if she doesn't she really can be a frightful person to be near. She is also uses people. She once made friends with a man called Terry, just to get her hands on his money and have a job and a place to stay. But, I would still like to be Janine because she knows how to have fun and is very witty. Janine also knows how to take care of herself. These are the reasons I admire her. On a whole, I think Eastenders is really realistic because they don't exaggerate the issues too much - unlike other soaps. It is also fun and easy to watch. It doesn't matter if you miss one or two episodes because it is so easy to catch up on the plot. I really enjoy watching Eastenders along with 53% of television viewing and I think it is one of the best soaps to watch. ...read more.