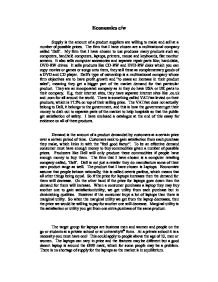 Economics c/w Supply is the amount of a product suppliers are willing to make and sell at a number of possible prices. The firm that I have chosen are a multinational company called 'Dell'. My firm that I have chosen to use produces many products such as; computers, handheld computers, laptops, printers, mouse and keyboards, flat monitor screens. It also sells computer accessories and separate repair parts like; hard-disks, DVD-RW drives. It sells products like CD-RW and DVD-RW disks which you can copy movies or games or songs onto them, they sell these as complementary goods of a DVD and CD player. Dell's type of ownership is a multinational company whose firm objectives are to have profit growth and "to cease an increase in their product sales", meaning they get a bigger part of the market demand for that particular product. They are an incorporated company as in they do have USA or UK parts to their company. E.g. their internet sites, they have separate internet sites like .co.uk and .com for all around the world. There is something called VAT/tax levied on their products, which is 17.5% on top of their selling price. The VAT/tax does not actually belong to Dell, it belongs to the government, and this is how the government get their money to dish out to separate parts of the market to help hospitals so that the public get satisfaction of safety. ...read more.

Whereas if an individual earns a higher income level then they will be expected to spend more as they will have a higher disposable income and will feel good about there purchase(s), they will also have a higher marginal propensity to consume (MPC). This theory states that for every � of income will have a willingness, or inclination or propensity to spend much of it rather than to save. In the UK the MPC is over 70%, meaning for every � of income we get, we spend 70p of it. Advertisement is also a factor. If there are advertisements on TV, radio, billboards or anywhere where the general public can see some people would become interested. But if people don't advertise then they will not know about your business and what you sell and is shift factors or factor that is likely to cause a shift of demand. But they need to make the advertising campaign an effective one. Adverts that do not appeal to the public will have a much reduced effectiveness at increasing sales. Fashion is one of the biggest factors, like clothes people want the new improved technology or new feature for a laptop. People don't want the older slower ones the want the newer more stylish ones because it brings attention to it, and ...read more.

Based on my above reasoning, my hypothesis is that it competes by having such a big global company that everyone realises and USP's and promotional which attracts more customers. Also by the amount of advertising and promotion which is broadcasted around the whole of the world. 1. What type of computer(s) do you have, either at home or work? Dell? Apple? Hp? Other (please state) 2. What types of computers have you seen advertised and are broadcasted either on the television or the radio that you can remember? 3. When you have gone abroad, have you noticed any of Dell's adverts or promotional campaigns anywhere? 4. Have you ever bought any of Dell's products that were on special offers? 5. Where did you hear about Dell? 6. What shops do you know that sell Dell's products? 7. When talking about computers is Dell ever mentioned? I have completed a survey at PC World, which sells all sorts of varieties of computers laptops and computer equipment in general. I then recorded many laptops of each make they had on show in their store. Dell 28 Hp 21 Acer 16 Apple 7 So as you can see from this set of results. I then asked the manager of the store and he told me that the best selling laptop was Dell. ...read more.