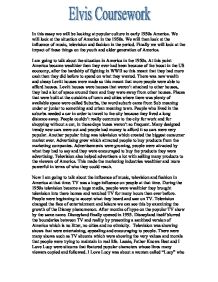 In this essay we will be looking at popular culture in early 1950s America. We will look at the situation of America in the 1950s. We will then look at the influence of music, television and fashion in the period. Finally we will look at the impact of these things on the youth and older generation of America. I am going to talk about the situation in America in the 1950s. At this point America became wealthier then they ever had been because of the boost in the US economy, after the hardship of fighting in WWII so this meant that they had more cash then they did before to spend on what they wanted. There was new wealth and cheap Levitt houses were made so this meant that more people were able to afford houses. Levitt houses were houses that weren't attached to other houses, they had a lot of space around them and they were away from other houses. Places that were built at the outskirts of town and cities where there was plenty of available space were called Suburbs, the word suburb came from Sub meaning under or junior to something and urban meaning town. People who lived in the suburbs needed a car in order to travel to the city because they lived a long distance away. People couldn't really commute to the city for work and for shopping without a car, in those days buses weren't so frequent. ...read more.

He was new and different, he was a white kid singing like a black guy and his music made people go wild and crazy. Their music was new, fresh and different which made it very popular with people extremely with teenagers who were trying to escape from boring middle class America into a more exciting lifestyle America. Also singers like Doris Day and Rosemary Clooney influenced their music with their fashion on many young women's. Another influence of music was from "The Rat Pack" who were male performers famous not only for their music but also for their glamorous lifestyle. I think music influenced people on going out more, doing things and having fun and mixing with different culture and society. Fashion was another thing that influenced people in the 1950s. Formal dressing for women's were wearing dresses with matching shoes, hats handbags and gloves. Woman's made sure that they always had their hair done and makeup on. A normal respectable woman certainly would not go out in trousers looking like men's. Men's wore suits and ties for work or special occasions. Their weekend clothes were casual which was wearing slacks and shirts. Their hair was short back and side ways, not messed up and long. I think influence of fashion was mostly from music and television. Television actors and actresses were influencing their style of fashion on people so the people copied them and dressed, did their hair and make up just like them. ...read more.

Going to concerts, dances, drive in movies, having fun, riding fast cars and enjoying life became teen culture. In conclusion, describing popular culture in early 1950's America appears to be describing a culture controlled by the youth. Popular culture means the lifestyle, fashion and ideas that were common in a society. They are passed on to the people through TV, films, adverts, magazines and fashion. Teenagers took over popular culture because they had more money to express their feeling their desire and their freedom. They didn't have to take care of a family so they had money to spend on what they wanted, they either got allowances or at least had a Saturday job. Teenagers had more money to spend on fashion, style and fun things they wanted so they took over popular culture. Teenagers were mostly influenced by television, music and advertisement. The marketing industries figured out that these young people had a lot of money in their hand so they came up with products related with TV and music that attracted them so another reason for teenagers taking over popular culture was because the marketing industries were targeting and focusing on them. Popular culture was taken over by teenagers because they didn't have racial attitudes, they didn't care about the colour of people, they were just interested in music, interested in having fun and living and enjoying their lives. The older generation now saw popular culture having to follow the whims of their children's consumer habits, rather then their own. ?? ?? ?? ?? ...read more.