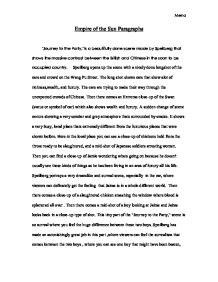 Empire of the Sun - Journey to Party Scene Analysis. &quot;Journey to the Party,&quot; is a beautifully done scene made by Speilberg that shows the massive contrast between the British and Chinese in the soon to be occupied country.

Empire of the Sun Paragraphs "Journey to the Party," is a beautifully done scene made by Speilberg that shows the massive contrast between the British and Chinese in the soon to be occupied country. Speilberg opens up the scene with a nicely done longshot of the cars and crowd on the w**g Pu Street. The long shot shows cars that show alot of richness,wealth, and luxury. The cars are trying to make their way through the unexpected crowds of Chinese. Then there comes an Extreme close-up of the Swan (statue or symbol of car) which also shows wealth and luxury. A sudden change of scene occurs showing a very somber and grey atmosphere thats surrounded by smoke. It shows a very busy, local place thats extremely different from the luxurious places that were shown before. Here in the local place you can see a close-up of chickens held from the throat ready to be slaughtered, and a mid-shot of Japanese soldiers arresting women. ...read more.

While Jaime, is oblivious to everything thats happening, he is lucky , pampered, and extremely fortunate. So this part just creates a whole dreamlike mood that the viewers definately feel and are aware of. Another thing you can see find is a close-up of Golden fireworks that are crackling very loudly. Speilberg also made a great choice in this scene because he makes these fireworks look and sound as if their b**b attacks which just makes us more aware of the situation that the Chinese are going through. Then a Point-of-view shot occurs, showing piles of sacks that Chinese soldiers use for defence and you can also find an army tank where the owners appear to me unknown (probably the Chinese are the owners). These piles of sacs and tanks show viewers that Chinese has been definately occupied by the Japanese. ...read more.

I thought it was lovely when he changed from High-key to Low-key lighting all in a matter of seconds instead of choosing to lower the lighting gradually. The street where the locals are is surrounded with smoke and it's very somber and dark. Then you can find a Close-up of Jaime and the directer uses High-key light on him and then a change of lighting right when the camera faces the chauffer you can see High-key lighting. It's a superb idea to make Jaime appear with High-key lighting and the chauffer and locals with Low-key lighting. This technique definately shows that the directer is trying to tell us that there is a difference or gap between the British and the Chinese. The directer then ends the scene High-key lighting when they pass the locals and head to the bridge. Lighting is very important in a movie because it makes it more clear for us what the scene might be about and Speilburg definately does a greeat job at that. ?? ?? ?? ?? Mena ...read more.