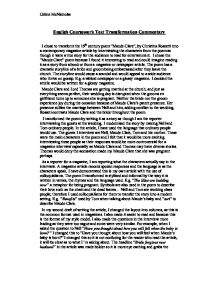 English Coursework Text Transformation Commentary I chose to transform the 19th century poem "Maude Clare", by Christina Rossetti into a contemporary magazine article by interviewing the characters from the poem as though it were a true story for the audience to read for entertainment. I chose the "Maude Clare" poem because I found it interesting to read and could imagine reading it as a story from a book or from a magazine or newspaper article. The poem has a dramatic storyline of a bride and groom being embarrassed after they leave the church. The storyline would cause a scandal and would appeal to a wide audience who thrive on gossip. E.g. a tabloid newspaper or a glossy magazine. I decided the article would be written for a glossy magazine. Maude Clare and Lord Thomas are getting married at the church, and just as everything seems perfect, their wedding day is disrupted when the grooms ex girlfriend turns up to announce she is pregnant. ...read more.

E.g. "Benefits" used by Tom when talking about Maude's baby and "tart" to describe Maude Clare. In my second draft of writing the article, I changed the layout into columns, as this is the common format used in magazines. I also made it easier to read and because this is the format of my style model. I also made the questions in the interview more leading as they were too vague and some were very similar. For example, when I asked the question to Nell "Have you thought about how you will fell when the baby is born?" I changed this to "Have you thought about how you will feel when Maude's baby is born?" I changed this so it is not confusing for the reader who read the article, it will be clear as to what I 'm asking about. The headline "Bride forgives new husband" in the article was made bolder so it is more eye caching and grabs the reader's attention. ...read more.

The title in the poem, Maude Clare is the main character but I transformed this title into the headline "Pregnant ex disrupts wedding." Nell is the main character in the article whereas Maude Clare is the main character in the poem. I invented other characters in my magazine article to make the situation more believable. These characters are Nell's best friend Louise and Martin, a friend of Toms. Other changes are that the poem is written in verses but I transformed my article by writing in columns as this is the format for a magazine. The interviews in the article give an insight into the characters feelings and thoughts as the reporter asks insensitive questions and the characters give direct responses contrary to in the poem, we have to guess how they feel by the language used such as metaphors. As a reporter, I repeat questions to find out the truth of what really happened. The reporter only cares about making headline news so the story is more straightforward in the article compared to in the poem; we have to work out what is going on for ourselves. ?? ?? ?? ?? Celine McNicholas ...read more.

* As a piece of English coursework, it would be expected that the essay contain far more reference to the linguistic devices used in the poem. It would be best to identify a linguistic device eg. the juxtaposition in the poem, then analyse what this tells us about the characters, before discussing how this is translated into a modern media article.