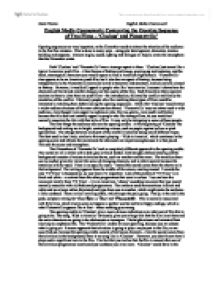 English Media Coursework: Comparing the Opening Sequence of Two Films - 'Clueless' and Pleasantville' Opening sequences are very important, as the filmmaker needs to attract the attention of the audience in the first few minutes. This is done in many ways - using plot development, characters, tension building and suspense. Camera angles, sound, lighting and dialogue all help to create the atmosphere that the filmmaker wants. Both 'Clueless' and 'Pleasantville' have a teenage aspect to them. 'Clueless' just seems like a typical American youth film - it has themes of fashion and image, growing up and maturing, and the stock, stereotypical characters you would expect to find in American high schools. 'Pleasantville' also appears to be an American youth film, but it also has an aspect of fantasy, because being transported in to the Pleasantville television world is abnormal and unnatural, and can only be classed as fantasy. However, it would still appeal to people who like 'teen movies', because it shows how the characters of David and Jennifer change over the course of the film. Both films have three essential sections to them to class them as youth films - the introduction, followed by conflict and finally the resolution of the conflict. Obviously people who like watching these types of films would be interested in watching them before seeing the opening sequences. I think that 'Clueless' would attract a wider audience because of the more obvious teen theme. 'Pleasantville' may not attract such a wide audience, even though it can appeal to audiences who like two genres - teen youth and fantasy because the title does not instantly appeal to people who like teenage films, as you would not normally associate the title with that style of film. It may only be intriguing to some of those people. The first things the audience sees are the opening credits. At the beginning of 'Clueless' the background and writing are in bright, contrasting colours, such as purple against yellow or pink against blue. ...read more.

All the language they use in Pleasantville is very polite - such as 'geewiz', 'pumpkin' and 'swell'. These are all old-fashioned American expressions. In contrast, in the real world they use 'h**l', 'slutty', and 'mud bath' and there are all of the awful things going on in the world - such as famine, HIV and lower salaries. Jennifer and David's mother is a huge contrast to Bud and Mary-Sue's mother in Pleasantville - she appears uncaring because she is just leaving them so she can meet her boyfriend and sounds moody when she is talking to him. The teachers at the school are also stereotypical - depressed and talking about depressing topics in dreary-sounding voices, whereas the teachers in Pleasantville are all cheerful. The people in Pleasantville again contrast against the real world, because they appear na�ve and innocent - couples have separate beds and at Lover's Lane about the most passionate the teenagers get is holding hands. The families seem very close in Pleasantville too, unlike in the real world. Everybody seems to have a routine and each person has a defined, definite existence - until they turn coloured there is no variety in their life. Their life is 'reliable' and the same, which is the name of the television repairman's company. All of these stereotypes help to attract the audience's attention because often you can relate to the stereotypes because you may know people who are similar, and also because the characters may be humorous, such as Travis. You see all the main characters in the two films develop and mature, and another thing that interests the audience is seeing them develop relationships - such as Cher and Josh. Especially as you can see that there is chemistry between Cher and Josh, yet the characters don't realise it themselves, you carry on watching to see if they get together. There is also the comedy factor to keep you interested in watching. ...read more.

The artificial lighting in 'Clueless' could represent that Cher is 'artificial' at the beginning - she is the superficial character who is only really interested in fashion and image - not at all in what is going on in the 'real world' because she would rather watch cartoons than the news. The lighting in 'Pleasantville' on the other hand is realistic - probably to indicate that the world is not fake but authentic, unlike 'Clueless'. I think I prefer 'Clueless' as I can relate to the characters more and really like 'teen movies'. Although some of the characters are similar in 'Pleasantville', such as Cher and Jennifer, there were more obvious stereotypes that created more humour, such as Travis, in 'Clueless'. You see the main characters mature, but in very different ways - which are very successful. Both were humorous, but I think that 'Clueless' was more humorous, and as I love comedy this appealed to me more. 'Clueless' was a real 'feel-good' film - you could watch it and enjoy it simply for comedy, whereas it's harder to do that with 'Pleasantville' because it has an obvious, serious message. 'Clueless' was definitely more light-hearted and kept the lively pace going more, so I preferred it because of this. You feel more involved in 'Clueless' too, because she talks in the voiceover to the audience and it is personal, but in 'Pleasantville' the audience feels much more like a spectator. I still did enjoy 'Pleasantville' though - it was still funny and was also unpredictable, but was not as successful at attracting my attention as 'Clueless' even though I do like fantasy films. Mrs. Jordan's comments: a very well written piece, which despite its length, is a pleasure to read because of its fluent style. Demonstrates highly skilful analysis and interpretation of the way filmmakers work. Makes apt and sometimes original comparisons. ?? ?? ?? ?? Katie Paxton English Media Coursework ...read more.