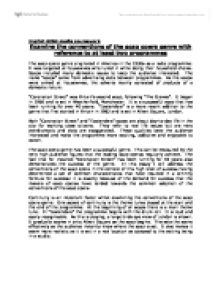 English GCSE media coursework Examine the conventions of the soap opera genre with reference to at least two programmes The soap opera genre originated in America in the 1930s as a radio programme. It was targeted at housewives who tuned in while doing their household chores. Soaps included many domestic issues to keep the audience interested. The name "soaps" came from advertising slots between programmes. As the soaps were aimed at housewives, the adverts mainly consisted of products of a domestic nature. "Coronation Street" was Britain's second soap, following "The Groves". It began in 1960 and is set in Weatherfield, Manchester. It is a successful soap that has been running for over 40 years. "Eastenders" is a more recent addition to the genre that first started in Britain in 1982 and is set in Albert Square, London. Both "Coronation Street" and "Eastenders" soaps are about day-to-day life in the city for working class citizens. They refer to real life issues but are very overdramatic and plots are exaggerated. These qualities keep the audience interested and make the programme more exciting, addictive and enjoyable to watch. The soap opera genre has been a successful genre. This can be measured by the very high audience figures that the leading soap operas regularly achieve. The fact that for instance "Coronation Street" has been running for 43 years also demonstrates the success of the genre. In this essay I will address the conventions of the soap opera in the context of this high level of success having determined a set of common characteristics that have resulted in a winning formula for success: it is exactly because of the demand for success that the makers of soap operas have tended towards the common adoption of the conventions of the soap opera. Continuity is an important factor whilst examining the conventions of the soap opera genre. One aspect of continuity is the theme tunes played at the start and the end of the programme. ...read more.

Characters in soaps are predominantly of the working classes, perhaps reflecting the demographics of the target audience. Soaps have a wide range of characters so that the audience can engage with different ones. The audience often begin to feel that they know the characters and can relate to them. This creates interests in how characters will develop and how they will cope in difficult situations. We may identify a convention amongst soap operas of a multi-tiered plot. The underlying long-term storyline ensures that an individual soap opera may effectively become part of a nation's popular culture. A medium term plot will ensure that a viewer who misses an episode will be able to easily regain an understanding of the storyline. Sub-plots are fundamentally there to hook viewers in according to a specific situation that they may relate to or that is exciting to watch. One convention of the soap opera genre is that we can anticipate future events. This form of dramatic irony keeps the viewers interested, as they want to find out if they correctly guessed an ending to a particular storyline. In "Eastenders" recently, the main plot was Alfie, Cat and Dennis in a love triangle. This kept the viewers interested as we anticipated Cat finding out that Dennis is a womaniser, and that in fact Alfie has strong feelings for her. In situations like this one the audience keep watching to find out what will happen. While this main plot was going on, a number of sub-plots included Barry's car lot getting a new contract, Martin and Vicki shoplifting and Phil meeting Martin as he is released from jail. These plots are all inter-linked into the main plot. Before one storyline comes to an end, another one begins, keeping the audience watching. The audience watch to see how one storyline is resolved, and get addicted, as they want to see what the outcomes of the sub-plots are. ...read more.

Soap operas have had a powerful grip on the nation for over 50 years. They have the key ingredients to get people interested and keep them hooked into the action. I have identified these key conventions of the soap opera genre as: Engineering continuity- This element of the soap opera genre ensures that viewers keep watching the soaps and that new viewers can easily get into the action and storyline of the soap. Demographics and scheduling- This creates regularity for the viewer and helps to ensure that they always know when they can view soaps. It also involves the broadcast time of the soaps e.g. what time are they on and what audience will be available to watch the soap at that particular time-who is the target audience? Plot, sub-plot and long term storyline- A plot is the current major event that is taking place in a soap. Plots are usually exciting and they aim to keep viewers interested in the soap. They also help to attract new viewers who hear about the storylines from press coverage, through friends and colleagues and through advertising. The sub-plots are smaller plots that happen alongside the main plot. They add interest to the soap and interlink main plots. The long-term storylines are there to keep older viewers involved in the action of the soap and to help keep them aware of what is currently happening in the soap, especially if they have missed a number of episodes. Photographic style- The photography in soaps helps the audience to see the setting at the same time as the characters, making it all seem more realistic. Few people in a shot at a time ensures that the audience do not become confused with what is happening at any one time throughout the episode. Close-up shots on a characters face show us what that character is thinking through their facial expression, causing the audience to feel as if they know the character. All of these aspects have ensured viewers keep watching soaps and with these successful conventions the soap opera genre will last for many years to come. ...read more.