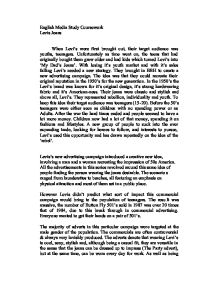 English Media Study Coursework Levis Jeans When Levi's were first brought out, their target audience was youths, teenagers. Unfortunately as time went on, the teens that had originally bought them grew older and had kids which turned Levi's into 'My Dad's Jeans'. With losing it's youth market and with it's sales falling Levi's needed a new strategy. They brought in BBH to create a new advertising campaign. The idea was that they could recreate their original reputation in the 1950's for the new generation. In the 1950's the Levi's brand was known for it's original design, it's strong hardwearing fabric and it's American-ness. Their jeans were classic and stylish and above all, Levi's. They represented rebellion, individuality and youth. To keep this idea their target audience was teenagers (15-20). Before the 50's teenagers were either seen as children with no spending power or as Adults. After the war the hard times ended and people seemed to have a lot more money. Children now had a lot of that money, spending it on fashions and lifestyles. A new group of people to suck into the ever expanding trade, looking for heroes to follow, and interests to pursue, Levi's used this opportunity and has drawn repeatedly on the idea of the 'rebel'. Levis's new advertising campaign introduced a creative new idea, involving a man and a woman recreating the impression of 50s America. All the advertisements in this series revolved around this same idea of people finding the person wearing the jeans desirable. ...read more.

It makes them believe that they are the centre of attention and all eyes are solely focussed on them (like the man entering the office in his motorbike in 'The Deal' ad). Another example is the advert called 'The Beach'. In this advert the male character is represented as being the modern equivalent of a rebel. The sky clear blue, the weather is hot and the sand is golden shows of being a typical American Summer. The music is called 'Can't Get Enough' written by 'The Bad Company', which plays all the way through the commercial. It particularly gives the whole atmosphere of American summer feel. The words fits perfectly with the ad give the maximum impact. It begins with the a male wearing a Levis 501 jeans and his dog walking along a beach. The man takes off his jeans and leaves them in the care of his dog whilst, (assume) he goes surfing. A man who eyes up the jeans whilst eating an ice cream received defensive and excessive barking from the dog, so the man carries on walking. The next cross cut action of the camera is a medium shot of an attractive young lady wearing a bright yellow bikini. She spots the jeans and begins to put the jeans on with the dog watching her every move. As the girl turns her back on the dog and attempts to walk away, the dog suddenly launches for her leg in an attempt to stop her. ...read more.

This reaction would bring in a lot of sales because the people would want to mimic their idol. Women feature in these adverts by becoming the item that the Levi's men want, 'Pickup'. This image means that women of the audience will buy the jeans to become the 'Levi's man's goal' and the men will buy the jean to 'get Levi's women'. The audience responds to the Levi's man/ woman by buying the Levi's jeans. The audience having the following ideas makes this decision: Male - "As he gets all the girls, if I buy these jeans that means I will get all the girls too" Female - "That girl always looks beautiful and always has the guys wanting to be with her, if I buy those jeans I will become attractive to the opposite sex too" The audience is influenced by the adverts, thinking that by buying these jeans that they will also be buying the looks, the lifestyle and becoming attractive to the opposite sex. The rebel elements I think that is particularly successful is the 'Laundrette' style ads because the idea of perfect people (Levi's man and woman) advertising these jeans would make the audience think that if they bought the jeans they could become perfect people too. I think the advertising campaign in 1980s is better than what Levis has now. Because the campaign back then is more interesting, humorous and more connected with day to day life of audience. In another hand, as advertisement industry grows, it is harder to make a successful advertising campaign that could stand out from the crowed than back then. ...read more.