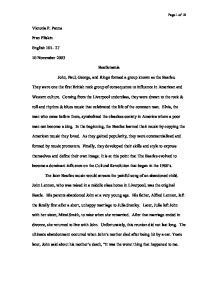 Victoria P. Panna Fran Pliskin English 101- 27 10 November 2003 Beatlemania John, Paul, George, and Ringo formed a group known as the Beatles. They were one the first British rock group of consequence to influence in American and Western culture. Coming from the Liverpool underclass, they were drawn to the rock & roll and rhythm & blues music that celebrated the life of the common man. Elvis, the man who came before them, symbolized the classless society in America where a poor man can become a king. In the beginning, the Beatles learned their music by copying the American music they loved. As they gained popularity, they were commercialized and formed by music promoters. Finally, they developed their skills and style to express themselves and define their own image. It is at this point that The Beatles evolved to become a dominant influence on the Cultural Revolution that began in the 1960's. The later Beatles music would scream the painful song of an abandoned child. John Lennon, who was raised in a middle class home in Liverpool, was the original Beatle. His parents abandoned John at a very young age. ...read more.

As a young musician, Ringo tried writing songs, but they often were plagiarized from the music of Jerry Lee Lewis. Before the Beatles, he was an established drummer in Hamburg with another group. John and the gang were glad to have him join the Beatles simply because he was homely and had a set of drums. In Liverpool, drums were expensive; thus, drummers were hard to come by. The Beatles initiated many firsts in music. They were one of the first bands to have a "weird" name: Beatle. The name is a pun: it is both an insect and the foundation of all music, the beat. The band changed from The Quarrymen to The Beatles, which implies both "the big beat" and "beat's all" (Goldman pp.85-86). Their name is also important because, for the time, there was no band that had a name like that. Most groups used the name of the lead singer with a back up like "Ronnie and the Ronnettes." It took several years before the Beatles developed the sound for which they are now famous. Their early forms of music were copied pieces, not anything that they wrote themselves. ...read more.

Not only that, but their tour of America was plagued with mishaps. During the remainder of the sixties, The Beatles not only became a musical phenomenon, they affected the styles and fashions of the decade. They transformed the record industry as well. They brought about royalties for artists and producers, revolutionized music tours, and started the Pop promo film or what we know today as "The Music Video." Every one of their albums, from Please, Please Me to Abbey Road was popular and unique in their own way. Due to outside interests, the group focused less and less on the band. In late 1964, they were introduced to marijuana and would experiment with more drugs, such as LSD. The Beatles played their last concert at Candlestick Park in San Francisco on August 29, 1966. They released their 1966 album Revolver, where their music and lyrics took on a more somber, mystical tone than on their previous records, which portrayed a youthful, pop- oriented tone (Franco.) At this time, George began experimenting with the Sitar and Eastern Philosophy (Franco.) They also released their next film, Yellow Submarine, was a dark, psychedelic cartoon full of political references. In 1967, the Summer of Love Tour was kicked off by the release of Sgt. Pepper's Lonely Hearts Club Band followed by the Magical Mystery Tour. ...read more.