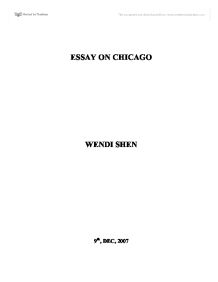 The story of Chicago is a satire on corruption in the administration of criminal justice.This musical comes from the book Chicago which was written by Fred Ebb and Bob Fosse. In 1920s America many people became alcohol dependant and the level of alcoholism rose tremendously. During this time, crime increased sharply and the society wasn’t as safe as before. Furthermore, some politicians were linked to the gangs. In order to get more money, they cooperated with each other.  Some American cities became centers of crime, cities such as Chicago, New York and Boston. Due to alcohol addiction, crime increased and some people killed others without conscious. In the 1920s, people neglected the law and did not respect it, in their eyes, the police and government meant nothing. However, the officers in the government were very corrupt, they did not do their responsibilities well, and they just wanted to use this environment to get more money. As it can be seen, in this period, the whole American was queasy. This musical uses a symbolic and satiric way to expose the American society in 1920s

A. Now I am going to discuss the set and costume design.

B. Actors and Audience Relationship

1. At the beginning of the show, an announcer established the direct relationship between audience and performers. Actually, during the show, announce appeared many times, but announcers were played by performers, there was no an immovable person to be the announcer.

2. In order to communicate with audience, performers always face the audience. Although they were talking with each other, their faces were to the audience.

3. As I talked before, they performed on the ladders. It was a form of direct communication to the audience.  They were telling the details of the story to spectators; the lines were not the dialog between performers. So the audience would feel they were talking to the actors, they were part of the show.

4.The orchestra is important in communicating as well. At the end of the show, audience hands capped for this successful performance, and the conductor and musicians responded to audience, they continued the music. Then audience hands clapped with therhythm which made by orchestra. This was a typical example of the relationship between actors and audience.

5. When some actors finished their part of a scene, they did not go back to the background; they just sat on the chairs which were at two sides of the stage. Actually, sometimes they sang with the actors who were on the stage now, and their voices were background music. In my opinion, it is a kind of communication with audience.

In conclusion, Chicago is a very attractive musical show, compared with the film; it gives me a deep impression, and help me understand its theme better. Before I went to the theater to watch Chicago, I saw the film. And I just thought the songs and dance in Chicago (film) were good, but I did not think more about the theme. But from this musical it seems that I saw American society in 1920. Some scenes gives me deep impressions, for example, the puppet scene, Roxie sat on Billy’s knees, and Billy controlled her and other people just like puppets. It means that everyone can be controlled by him, so in other words, just means corruption in America at that time was serious. So I think it is a smart and interesting way to expose society. Film and musical has many differences, film can express a story easy, because it can tell the story by the true-live scene, but in musical, the stage is limited, so actors do not have such a huge space to perform. And musical can make this story compact, so audiences can concentrate, and a musical has different kinds of mise-en scene which can attract the audience as well. Overall, Chicago is an unforgettable narrative and either the film or the musical can give audiences the same universal theme but different interpretations.