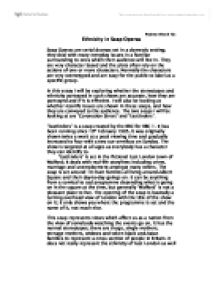 Prudence March 10s Ethnicity in Soap Operas Soap Operas are serial dramas set in a domestic setting; they deal with many everyday issues in a familiar surrounding to ones which their audience will live in. They are very character based and the plots often rely on the actions of one or more characters. Normally the characters are very stereotyped and are easy for the public to label as a specific group. In this essay I will be exploring whether the stereotypes and ethnicity portrayed in such shows are accurate, how they are portrayed and if it is effective. I will also be looking at whether real-life issues are shown in these soaps, and how they are conveyed to the audience. The two soaps I will be looking at are 'Coronation Street' and 'EastEnders'. 'EastEnders' is a soap created by the BBC for BBC 1. It has been running since 19th February 1985, it was originally shown twice a week at a peak viewing time and gradually increased to four with a two our omnibus on Sunday. The show is targeted at all ages as everybody has a character they can identify to. 'EastEnders' is set in the fictional East London town of Walford; it deals with real-life storylines including crime, marriage and unemployment amongst many others. The soap is set around 10 main families all living around Albert Square and their day-to-day goings on. ...read more.

There has also been an Italian family in 'EastEnders', the 'di Marcos' they ran the Italian restaurant and were Walford's answer to the mafia. These stereotyped characters reveal a lot about the producer's, and the audience's assumptions about ethnic minority groups. The values of the groups are below the London average, let alone the ethically diverse East London area and the messages that are given off about these groups are very typical of English attitudes. The black minority are seen as gangsters, or thugs and the Asian minority seen as male-dominated and generally poor. If I was producing 'EastEnders' I would include more accurate representations of ethnic minorities as the examples that are given are quite negative and very stereotyped. I would also definitely increase the number of Asian families in Walford and I would like to see more families from different religions, e.g. Sikh, Muslim and Jewish. The next soap I will be looking at is Granada's 'Coronation Street' which is shown on ITV. It has been running since 9th December 1960, 5 years more than 'EastEnders', It is shown 4 days a week at a peak viewing time with a Sunday omnibus shown on the digital ITV2 channel. Again it is targeted at anybody who identifies with the characters or the storylines. It is set in the fictional town of Weatherfield in the multi-cultural city of Manchester and can include many storylines, but like 'EastEnders' they are very diverse. ...read more.

In the two soaps there have been good spreads of ethnic minorities and adequate storylines for the characters involved. However, the bad points of the representation of cultural diversity weigh out the good ones. I feel in the two soaps the real-life numbers for population of ethnic minorities have not been met. I also feel that the storylines set for these characters are quite r****t; most of them portray these minorities in a bad light and express the views of the wrong people in the UK. They also forget a lot of the minorities, concentrating on Asian and black families when there are a lot more minorities than that. Overall, despite the bad points I feel that 'EastEnders' is the most successful at being culturally diverse than 'Coronation Street'. This is mainly because 'Coronation Street' gives really stereotypical views of the ethnic minorities and has a lot less non-white characters than it should be having. It is also not making as much of an effort to introduce new ethnic minority cast members as its counterpart. In the future I would like to see the government pass a bill that stop stereotypical or negative views of ethnic minorities being shown. This would also mean that a show would have to have the correct population of ethnic minorities as the average for where it is set to give an accurate overlook of life. I would also like to see the ethnic minority characters in roles which are usually given to white characters as they are just as likely to have these events happen to them. ...read more.