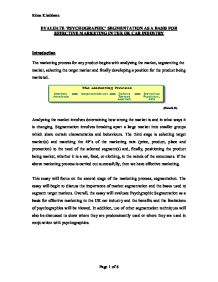 EVALUATE 'PSYCHOGRAPHIC' SEGMENTATION AS A BASIS FOR EFFECTIVE MARKETING IN THE UK CAR INDUSTRY Introduction The marketing process for any product begins with analyzing the market, segmenting the market, selecting the target market and finally developing a position for the product being marketed. (Nowell, D) Analyzing the market involves determining how strong the market is and in what ways it is changing. Segmentation involves breaking apart a large market into smaller groups which share certain characteristics and behaviours. The third stage is selecting target market(s) and matching the 4P's of the marketing mix (price, product, place and promotion) to the need of the selected segment(s) and, finally, positioning the product being market, whether it is a car, food, or clothing, in the minds of the consumers. If the above marketing process is carried out successfully, then we have effective marketing. This essay will focus on the second stage of the marketing process, segmentation. The essay will begin to discuss the importance of market segmentation and the bases used to segment target markets. Overall, the essay will evaluate Psychgraphic Segmentation as a basis for effective marketing in the UK car industry and the benefits and the limitations of psychographics will be viewed. In addition, use of other segmentation techniques will also be discussed to show where they are predominantly used or where they are used in conjunction with psychographics. ...read more.

Other segmentation techniques which are used in marketing include geographic demographic and behavioural segmentation. Geographic segmentation divides the market into different geographic units such as nations, countries, regions, cities, demographic into groups based on age, gender and income and behavioural based on occasions, benefit sought, user status, user rate and loyalty status. Demographic segmentation is used by car industries to target consumers. For example, luxury cars such as BMWs and Feraris will be targeted at those people who earn a high income. Also, different cars are targeted at different genders. For example, the Minis are more likely to be targeted at females rather then at males since it is a more feminine car. The stage in peoples' life cycle affects marketing. More expensive cars could be targeted at newly married couples since they are more likely to spend money on cars. Occupation is another variable of demographics. People will tend to but cars suitable for their occupation. Geographic segmentation is also used for segmenting the car industry. A four wheel drive car for example is more likely to appeal to and attract consumers living in the country or near the mountains. Both geographic and demographic variables are relatively easy to measure and to get access to however they are not very successful. Why? Well let's take an example. ...read more.

Income, a demographic variable, plays a very important role in marketing segmentation since it has a great effect on and can change people's lifestyles. The more money a consumer has the more luxurious his car would be. Gender and s*x are two further demographic variables which are used in conjunction with psychographics. The Alpha Spider car used both demographics and psychographics to segment and target consumers. This car attracts buyers who like fast sporty and stylish cars which they can show off and impress others since it posses those features. At the same time, the Alpha Spider would target people with high incomes since only they would be able to afford such a car. This car is also more likely to target men rather than women. Women are more likely to go for more practical cars and features such as the speed of a car wouldn't matter so much to them however, this is not always true. There are some women out there who do like such cars. This last example shows that psychographics and demographics work effectively when used in conjunction with one another. Conclusion Overall it can be concluded that psychographic segmentation is a good basis for effective marketing in the UK car industry. It can be seen that psychographic variables have an advantage over demographics and behavioral variables however they should not replace them. Instead, psychographics should be used and where appropriate, in conjunction with demographics in order to achieve effective marketing. ...read more.