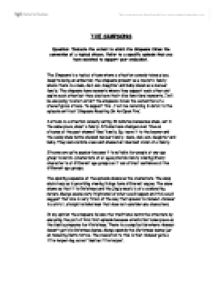 'Evaluate the extent to which the Simpsons follow the convention of a typical sitcom - Refer to a specific episode that you have watched to support your evaluation'.

THE SIMPSONS Question: 'Evaluate the extent to which the Simpsons follow the convention of a typical sitcom. Refer to a specific episode that you have watched to support your evaluation'. The Simpsons is a typical sitcom where a situation comedy takes place. Despite being an animation, the simpsons present as a realistic family where there is a mum, dad, son, daughter and baby known as a nuclear family. The simpsons have moments where they support each other and aspire each other but they also have their diss functional moments. I will be analysing to what extent the simpsons follow the convention of a stereotypical sitcom. ...read more.

They were middle class and showed an idealised vision of a family. Sitcoms are quite popular because it is suitable for people at any age group to watch. (characters of all ages provide family viewing) Every character is at different age groups so it can attract audiences at the different age groups. The opening sequence of the episode shows us the characters. The snap shots help us in providing viewing things form different angles. The snow shows us that it is Christmas and the jingly music is of a celebrating nature. Marge seems very frightened of what could happen and this could suggest that she is very tired, of the way that speaks to Homour. ...read more.

The resolution to this is that Homour gets a little helper dog called ' Santas little helper'. Marge re-evaluates their relationship by saying that 'a preasent can share our love.' And finally order is restored as they have a Happy Christmas. Typically in a sitcom the father would be strict. He would be highly respected amongst the family but Homer Simpson goes against this. Homer is a bit childish as he throws himself on the floor when he learns that all of the Christmas money is lost . He is dysfunctional. The daughter Strict, highly respectable- How simpsons goes against that, cries like baby, like a traditional dad, how is margew like. She is like a sitcom wife-lisa doesn't wanna be like her mum, great ambitions, then bart ...read more.