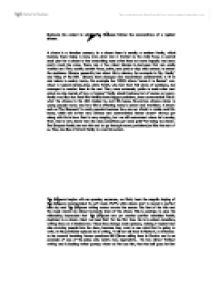 Evaluate the extent to which The Simpsons follow the conventions of a typical sitcom.

Evaluate the extent to which The Simpsons follow the conventions of a typical sitcom. A sitcom is a situation comedy. In a sitcom there is usually a nuclear family, which involves there being a mum, dad, sister and a brother as the main focus. A normal stock plot for a sitcom is that everything more often than not starts happily and ends pretty much the same. There are a few minor hiccups in-between that are easily worked out. They usually contain farce, satire, and puns or slap stick comedy to amuse the audience. Sitcoms generally last about thirty minutes, for example in 'My family' and 'King of the Hill'. Sitcoms have changed and modernized considerably to fit in and relate to society today. For example the 1950's sitcom 'Leave it to Beaver' was about a typical middle-class white family who had their fair share of problems, but managed to resolve them in the end. They were extremely polite to each other and acted as role models of how a 'proper' family should behave, but of course not every family was like that. Real life families have bigger problems, more controversial. This is what the sitcoms in the 50's lacked in, real life issues. Nowadays sitcoms relate to young people today and how life is affecting today's culture and traditions. A sitcom such as 'The Simpson's' is vastly popular because they are not afraid to tackle real life issues, which are in-fact very diverse and controversial. Homer doesn't always get along with his in laws. Bart is very naughty, but we still understand where he's coming from. Lisa is very clever and she does sometimes get some grief for being too clever. The Simpson family are not rich and do go through money problems just like the rest of us. They are like a factual family to a certain extent. The Simpsons begins with an opening sequence; we firstly hear the angelic singing of The Simpsons accompanied by soft music. ...read more.

I will be analyzing the episode "Roosting on Open Fire" in order to confirm this. The Simpson's episodes do follow a traditional narrative structure. The narrative structure has mainly four stages. The first one is orientation, an account when the story begins. The story starts with Homer, Marge and Maggie going to see Bart and Lisa in a school play. The second stage is that there is complication; this threatens to change the status quo. The complication is that Homer is not going to get his Christmas bonus and Marge has to spend all the Christmas money on surgically removing the tattoo on Bart's arm. Marge thinks that Homer is going to get his Christmas bonus and is relying on that to get them through Christmas. Humor is created when Homer gets a second job as Santa Clause. The third step is the resolution. Homer and Bart go betting and Homer bets all his earnings on a dog. This dog is certain to win so we think that it is all going to go well. But the story takes a turn for the worse. Homer gets this feeling about a dog-named ' Santa's Little Helper'. He thinks it's a sign, but of course the dog loses. They bring the dog home as the Christmas gift. The problem is now resolved. The forth stage is the evaluation. The Simpson's feel closer as a family now and Marge thinks about how sweet Homer is. They all re-evaluate their relationship, as Christmas is saved and the family is happy. So we can see The Simpsons follow the narrative structure of a typical sitcom. Sitcoms have stereotypical characters. The Simpsons as all other sitcoms have some stereotypes in characters I will be referring to two episodes 'Bart gets an F' and 'roosting on open fire'. Firstly I will be referring to "Bart gets an F", the character we start with Homer who is arguably one of the most humorous characters in The Simpsons. ...read more.

Ever-new episode there is a new gag that creates humor. The Simpsons is animated. Animation benefits the show; we can link animation with satire as it allows The Simpsons to get away with showing the idiocy of certain group such as education, teachers and parental values. Animation allows sitcom to break the rules; for example Maggie is an eternal baby and the characters never change. Animation allows anything to happen in the episodes for example the snow day. Anyone from the present, past or the future can turn up, for example, George Washington, Elvis and God have all appeared. So we can see The Simpsons use comical devices to create humor and how features such as animation and satire contribute to the success of the show and it humor. So we can see that The Simpsons follow the convections of a typical sitcom. To conclude we have seen that The Simpsons follow the convections of a typical sitcom to a certain extent. The Simpsons is popular worldwide. Hate it or love it everyone has an opinion about it. One of these people is President Bush, 'the nation needs to be closer to The Waltons than The Simpsons'. I disagree with his view, as The Waltons is an outdated family that is not very realistic and is stereotypical, whereas The Simpsons deal with real life issues. Mel Gibson believes that 'you can learn all life's lessons from watching The Simpsons'. I agree with him because The Simpsons deal with real life issues and the run into problems as a realistic middle class family would and they resolve their problem at the end. The Simpsons I very successful and watched by people of all ages for many reasons. A reason is a comedy appeal to a wide audience is because The Simpsons is a family the audience can relate to, not on ideal family. The Simpsons depicts stereotypical images, but individual characters subverts stereotypes this creates humor which will be a form of escape from a busy lifestyle for the audience. By, Prithvi Boyinapalli ...read more.